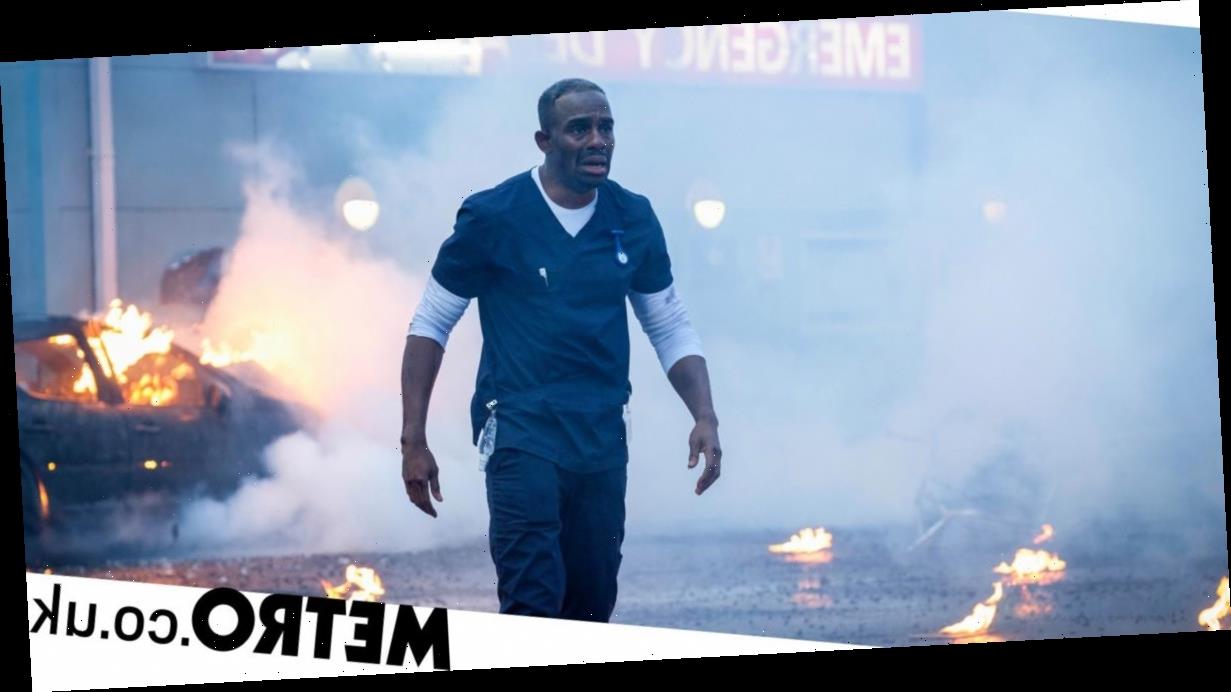 Jacob Masters (Charles Venn) and Connie Beauchamp (Amanda Mealing) in Casualty seemed to have hit the ground running with their relationship back when the show returned at the start of January. However, after the death of Noel Garcia (Tony Marshall), Connie felt his death was her fault and, once again, pushed Jacob away.

Coming up, Jacob and Connie’s relationship is tested once more as the husband of one of Jacob’s ex-patients enters the ED wearing a suicide bomber vest. As Jacob’s life is thrown into peril, Connie is forced to watch on the side-lines as the bomber holds Jacob to account for his wife’s death, threatening to take his finger off the DMS (dead man switch) if Jacob can’t remember the identity of the bomber’s wife.

It’s a hugely intense episode airing this Saturday, so Metro.co.uk thought it was high time to catch up with Charles Venn to ask him about the episode, starting with what viewers can expect:

‘What you can expect from this particular episode is a lot of tension, fear, it’s suspenseful as well. You have a situation whereby you’ve got a scenario where death is impending, it’s there, it’s in your face. As hard as one deals with that situation, when you know you can be blown up at any second, all the love ones are around you and you don’t have an opportunity to speak and say the things you want to say, it’s a crazy situation and a frightening situation I wouldn’t wish on anybody – expect a lot of tension!’

Suicide bomber Roy (Alan Williams) enters resus in the ED with the bomb vest on, and immediately establishes that he is very much there to talk to Jacob, and no-one else, putting Connie, Marty (Shaheen Jafargholi), a patient, and the rest of the ED staff in danger. Charles continued our chat, adding what Jacob is thinking when he figures out what Roy is planning on doing:

‘Being a clinical nurse manager and having his team in this room with a man that’s ready to just end it all now, his first thought is just trying to get them all out of there, trying to seclude this situation, that’s his first thought. I think the next thought is survival – how do I try and get myself out of this situation, those are the two primary thoughts and emotions going on in Jacob’s mind – it’s frightening too!’

As the situation escalates, Roy instructs Jacob to head outside of the ED, still angry that Jacob cannot remember the name of his late wife. Charles delved further into Jacob’s state of mind during this horrifying situation:

‘It’s amazing the flight or fight factor kicks in, and all of a sudden your mind is racing four, five, six steps ahead trying to calibrate and figure things out. Of course, one of Jacob’s thoughts are ‘what is his wife’s name?!’, and bear in mind Jacob has seen so many patients, he’s dealt with so many deaths, and a menagerie of illnesses, so for him he’s trying to go through that side of it to figure out who this woman is. He’s thinking ‘okay he told me about this illness she had, and going back to the house and picking up her stuff’ he’s trying to remember and remember so there’s that, he’s thinking ‘is it possible I can run off…can I make a move if I give them a sign, can they maybe wait’…it’s all of these things running through his head, but the primary instinct is survival, with fear as well – almost crippling fear.’

Casualty are filming under coronavirus restrictions, ensuring everyone keeps two metres apart from each other, and following rules to make sure everyone is kept safe. This of course means that filming something as huge as a stunt can prove difficult, but as Charles said, the team have developed ways that allow the viewers to barely even think about the restrictions when the episode airs:

‘The coronavirus restrictions have definitely made every episode an obstacle course. We’re more conditioned for it now, which is great, but still there’s times where you instinctively want to do things we’ve been doing all our lives until last year! It’s always tricky but we’re definitely a lot more equipped and able to convey the emotion, and with the great team, the camera operators the DOPs, manipulating depth of deception and changing the shots, there’s so many different ways we can create a shot whereby you are not reminded that we are cheating with two metre distances in place.

For the most part you are not aware of it apart from maybe when it comes to intimacy, but even then, we still have an answer for that too!’

Read part two of our interview with Charles Venn after Saturday’s episode of Casualty.