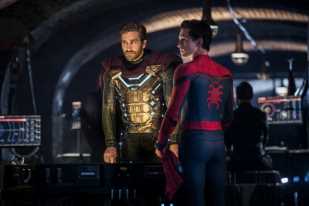 “I think you can take it on the surface for how the moment plays out and how it’s just laid out,” co-screenwriter Chris McKenna says

(This post contains major SPOILERS for “Spider-Man: Far From Home”)

You can’t always believe what you see. That’s the mantra of the villain from “Spider-Man: Far From Home,” who plays with illusions and toys with Peter Parker’s anxieties as a way of advancing his own agenda and ego.

He’s the ultimate con man, so it stands to reason that in the first of the two bonus scenes — one during the credits and one after — for “Far From Home,” Marvel might be pulling one more fast one on us.

However, screenwriters Chris McKenna and Erik Sommers spoke to TheWrap about the mid-credits and post-credits sequences and helped clarify a little about what we just saw.

(Seriously, leave now if you don’t want the mid and post-credits scenes from “Spider-Man: Far From Home” spoiled)

As Spider-Man and MJ are swinging around New York City at the end of the film, the mid-credits stinger reveals that Mysterio had a contingency plan in the event of his death. After Spider-Man’s battle with Mysterio we see one of his henchmen take a flash drive out of a computer. Then during the mid-credits scene, an edited video broadcast to New York makes it look as though Spider-Man murdered Mysterio in cold blood to become a new Iron Man, and he now wields an army of Tony Stark’s drone tech. But before the scene ends, Mysterio also reveals that Spider-Man is in fact Peter Parker.

While most of the other Avengers have fairly public personas, it’s a big deal that Spider-Man still had his anonymity. He’s just a kid, and Peter’s struggle in “Far From Home” is that he doesn’t want to wear the weight of the world on his shoulders and step up to become the next Iron Man.

“In ‘Homecoming’ you have a hungry kid who has a taste of being an Avenger for a weekend and who is determined to prove himself to Tony and be accepted as an Avenger, and in this one, he’s got the rugs pulled out from under him,” McKenna said. “He’s lost his mentor, he’s under an extreme amount of pressure, some of it self imposed, about what his place in the world is as a hero, and the expectations of the world, and he ends up running away from it. He turns his back on the responsibility and the pressure.”

“There was no question that that was going to be front and center in this movie, that was going to be a huge part, the dominating part of what’s going on in Peter’s psyche, and we just had to embrace it,” Sommers added. “I think ultimately then that was useful in developing the villain plot and coming up with a villain that was going to take advantage of Peter’s grief and his confusion about what he was going to do next and the pressure he was feeling and all that.”

But remember: Mysterio is incredibly deceptive. Some fan theories online have suggested that Mysterio isn’t actually dead, or that this might be one more ruse orchestrated by Mysterio for Peter’s eyes only. Here’s what the screenwriters had to say about that”

“I think you can take it on the surface for how the moment plays out and how it’s just laid out,” McKenna told TheWrap.

There was also the question of how Mysterio might fit back in with villains like Adrian Toomes (Michael Keaton), a.k.a. Vulture, from “Spider-Man: Homecoming,” should the two ever team up as part of the Sinister Six. The post-credits scene in “Homecoming” introduced the villain Scorpion into the MCU, and it was teased that Vulture knew Spider-Man’s identity and could one day use it against him.

That possibility seems to go out the window with “Far From Home,” and Vulture and Scorpion get nary a mention in this film. Though the writers defended that decision as well.

“I think the idea of bringing Vulture back into Peter’s future would be awesome. I don’t think we thought too much about bringing him back into this movie,” McKenna explained. “I think while that post-credits scene teased Vulture and Scorpion and some future with Peter, I think it was mostly about finishing the arc with Peter and Toomes where Toomes knows his identity and decides not to spill the beans to Scorpion in a way that he’s on his way toward changing and hopefully paying Peter back for saving his life.”

And finally, there’s the question of Nick Fury’s fate at the very end of the film. Here we learned that all this time, the Nick Fury we saw in “Far From Home” was actually the shape-shifting Skrull Talos as introduced in “Captain Marvel.” Meanwhile, the real Nick Fury is off on a spaceship somewhere doing who knows what, and we speculate more on that here.

You wouldn’t be crazy for wondering if this means that Talos has actually been taking the form of Nick Fury as far back as the 1990s in “Captain Marvel.” If you ask McKenna and Sommers about that one, your guess is as good as theirs.

“Yeah that’s a good one, I don’t know the answer to that,” Sommers said.

“I don’t know if Marvel has bigger ideas about that. We don’t know. Possibly. You’d have to ask Marvel,” McKenna added. “Marvel, they can trick us too.”

They did however love the idea of making Fury into a Skrull and said the idea specifically came from “Far From Home” director Jon Watts.

“That was Jon Watts, that was late in the game, playing with the idea of the thematic evolution,” McKenna said. “When you’re doing a movie about con artists, it’s always fun to have as many twists as possible. If there was anyone who questioned how Nick Fury was fooled by Quentin Beck, it’s a fun solution to anyone who would have a problem with THE Nick Fury falling for the illusion.”