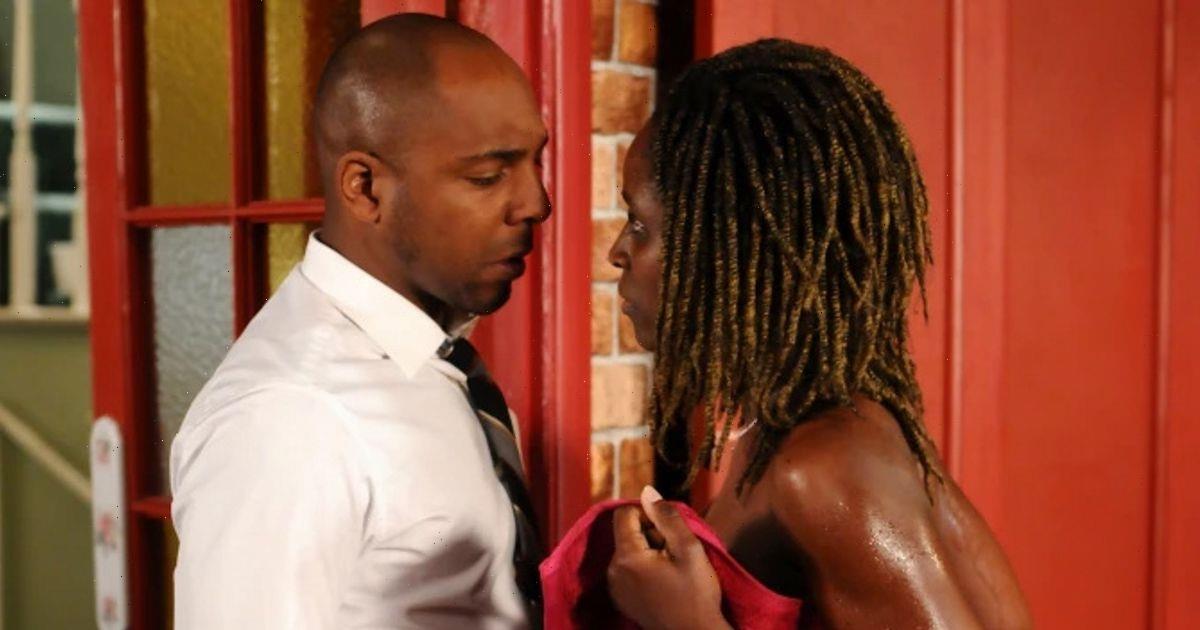 As viewers prepare for the spookiest night of the year, many will be tempted to cosy up under a blanket and watch one of the scariest horror movies out there.

However, Soap fans will know that sometimes it can be the unsuspecting villains that really catch others off-guard.

And where better place to look for a truly horrific murders, violent deaths and blood-curdling screams than on the plethora of UK soap operas?

Over the years, EastEnders, Coronation Street, Emmerdale and Hollyoaks have been sure to air some pretty distressing scenes – from an horrific rake impaling to a fatal crowbar thumping.

While readers get ready for a fun-filled night of terror, Daily Star has taken a look back at some of most gruesome deaths in Soapland.

Long-term EastEnders fans will remember Trina Johnson’s horrific death back in 2009 at the hands of her dog drowning and prostitute strangling ex-husband Lucas.

While the evil killer started out as a respectful man dedicated to his faith, he slowly became a villain on the square.

It didn’t take long for the menacing preacher to return to his wicked ways, as he famously went on to kill many Walford residents, starting with his ex-wife Trina.

The fateful night began when Lucas arranged to meet his drug-addict ex in Charlie Slater's allotment, where he found her cooking heroine in his shed.

When the loving mum tried to rekindle their relationship and put the moves on Lucas, he violently shoved her off him and onto a rake.

The evil father then left Trina to bleed to death before he made it look like a tragic accident while taking drugs.

But Lucas’ façade soon began to crack as he tried to cover up his crimes.

All of his dirty deeds finally came to light one year later when he confessed his guilt to Denise Fox and faked her death while he held her captive.

Things started to change when he attended her funeral held in the heart of Watford, where he had a change of heart as the town mourned her passing.

He later allowed her to escape from his cellar where he was finally arrested for the murders or Trina and Owen.

Dating back even further, one of Coronation Street’s more horrific deaths was arguably at the hands of businessman Richard Hillman.

Despite appearing calm and collected, the entrepreneur suffered major financial problems just months after he moved to Weatherfield in 2003 and later tied the knot with fan-favourite Gail Platt.

His killing spree first started when he left his business partner Duggie Ferguson – who co-owns their property company, Kellet Holdings – to die following a tragic accident after he fell through a banister in the office.

After he got a taste for blood, Richard began taking down all those who challenged his business, including his ex-wife Patricia who he struck with a shovel in order to silence her.

He later moved on to bigger crimes including the attempted murder of Gail’s mother Audrey Roberts in order to inherit her house.

When that plan failed, the businessman managed to persuade Emily Bishop to sign over her house to him in an equity release scheme.

It was clear he had other intentions at heart when he stage a robbery at Emily’s family home and ruthlessly beat her with a crowbar.

But Emily wasn’t his only victim that night, as Maxine Peacock also victim to his anger when she interrupted his plan and led him to silence her too.

Luckily Emily managed to survive the terrifying ordeal and went on to report the crime to the police which forced him into hiding for weeks on end.

When Richard finally thought of a way to end his suffering, he abducted the Platt family in his car before he drove them into the canal in a fatal suicide bid, though all but Richard survived.

Moving on to more recent crimes, Emmerdale fans are still said to be mourning the loss of fan-favourite Gerry Roberts following his brutal murder in 2018 at the hands of Lachlan White.

Lachlan first joined the Dales back in 2014 but it didn’t take long before his dark streak came out as the blonde hunk soon took his infatuation with married woman Alicia Metcalfe too far.

Throughout his time on the show, he was charged with sexual assault, arrested for the murder of his grandfather, and involved in a car crash that killed James Barton, Chrissie and Lawrence White as well as leaving their sister, Rebecca, brain-damaged.

But it was the cruel murder of Lachlan’s best friend and loveable rogue Gerry Roberts that left fans teary.

The beloved character met his grisly end when his close pal lured him out to the village B&B fondly named Whingles Ale which was still under renovation at the time.

Unluckily for Gerry, when he is asked to move one of the casks of ale at Lachlan’s request, his menacing pal kicked the barrel into the supporting beam which brought the whole building to its knees.

But the fatal plan didn't go according to plan, after Gerry survived the fatal crash despite being pinned under the rubble of the house.

In order to complete his murderous plan, Lachlan took a ginormous rock and hit Gerry on the head with one fatal blow.

But that wasn’t the end of his scheming ways, as Lachlan went on to take the life of Terry Bates and even hired his assassin father to burn down the Dingle family home.

Lachlan was soon arrested after the family home went up in smoke and now continues to live out the rest of his days in a maximum state prison.

The latest of the most shocking soap deaths has to be the death of Hollyoaks heartthrob Harry Thompson, who was savagely killed by unsuspecting nanny, Breda McQueen.

But he wasn’t the first victim of her killing spree, as her deadly streak first started back in in June 2018 when she first arrived in the Cheshire village.

The loving grandmother managed to hide her menacing side through her employment as an innocent nanny, but as she started working with families she started developing a hatred for lazy parents.

She soon devised a mission to take down anyone she perceived to be a bad parent which quickly led to a string of crimes and untold chaos in the show.

In the space of two years, Breda took the lives of Carl Costello, Mac Nightingale, and attempted to kill Mercedes McQueen.

But her plan began to crumble when the fan-favourite escaped her grasp and forced her to find another family to work for.

Despite her set back, the mother-of-two went on to work as a nanny for Dianne and Tony Hutchinson where she discovered Tony's son Harry was about to abandon his newbown child.

Freshly enraged, she went on to stab Harry in The Dog in the Pond carpark with a rusty screwdriver before she buried his body in the woods.

And her murderous reign didn’t last for long as the serial killer finally faced her crimes when she confessed her crimes to her son, Sylver, in January 2020.

Sylver took it upon himself to put an end her killing spree when he stabbed her through the skull with one of her knitting needles.