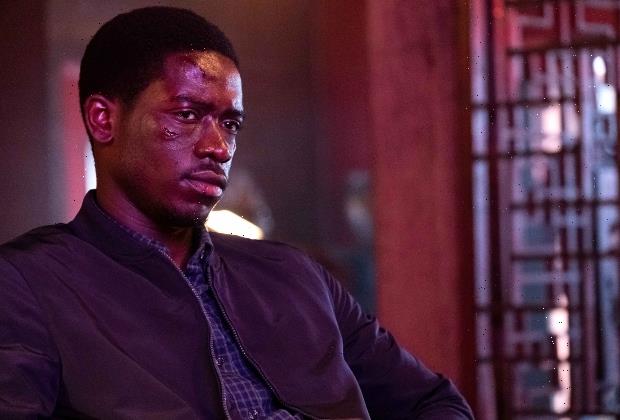 Franklin and Gustavo’s surreal interaction with a caged tiger continued on Wednesday’s Snowfall, but suddenly, everything made much more sense.

The installment opened with Franklin frantically waking up Gustavo, aka Oso, so they could figure a way out of this very bizarre circumstance. Oso woke up and wasted no time assessing the situation. Upon examining the neighboring bars that separated them from the ravenous-looking big cat, Gustavo took off his belt and wrapped it around the bars in their cage and the nearby ones in the tiger’s cage.

Soon after, the creepy old white man who had shot them with a tranquilizer gun and caged them appeared and refused to set them free, no matter how much Franklin pleaded with him. Franklin even promised to give the man their hidden bags of millions, but the big game hunter laughed at the offer and attempted to use a lever to raise the bars so the tiger could eat Franklin and Gustavo alive.

This was not meant to be, however, and the man grew enraged when he realized Gustavo had linked the bars together so that they couldn’t ascend. The man then climbed to the top of the cages and tried to jimmy the bars loose. Gustavo wasn’t having it and rattled the cages until the man fell and the tiger ripped off his leg and ate it. 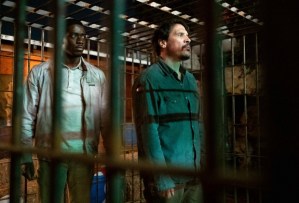 The man screamed in agony as Franklin struggled to reach his keys, which tumbled to the ground with his leg. As the animal feasted on the man’s appendage and he bled to death, Franklin managed to secure the keys and set himself and Gustavo free. But they weren’t out of the woods yet. Franklin’s gun was out of bullets, and they didn’t have a car.

The pair tried to steal a car to no avail, and the gang members who wanted their money were still looking for them. Franklin and Gustavo dodged one surveilling car, only to run right smack dab into another group of the gang bangers in a different car. The men threw Franklin and Gustavo in the trunk and drove to a closed nail salon where they tied them up and beat them in hopes that one of them would break.

When the torture became too much, Franklin caved and said he would take them to the house where they hid the money. Instead, he took the gang guys back to the tiger house, and the tiger mauled them and had a feast. Franklin grabbed one of their guns and pulled it on the youngest and smartest gang member, who was still in the car, and threw him in the trunk. Franklin drove to a payphone and called Uncle Jerome and let him know where he was. 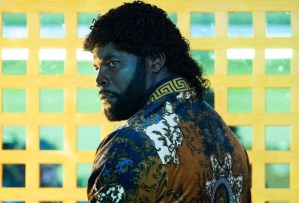 Jerome and Leon came and picked up Franklin, but not before he opened the trunk, threw the car keys inside and snarkily told the smart aleck to use his brains to figure a way out. Franklin, Jerome and Leon then ambushed the men at the nail salon and liberated Gustavo. Leon and Jerome were going to shoot and kill the dudes, but Gustavo asked them to let the men live.

As they retrieved the money bags, Gustavo thanked Franklin for coming back for him because he didn’t have to return. Franklin said he knew it was the right thing to do, despite the fact that Gustavo and Teddy had been spying on him. Gustavo revealed he didn’t know Teddy was spying on him and he wasn’t a part of that, and Franklin believed him.

On the way back to Louie’s club, all four men saw the bloody-mouthed tiger roaming the streets and shuddered. Soon after, it was confirmed that Peaches had set them up because the locked building where Franklin’s money was hidden had been cleaned out, and the only other person aware of the cash cache was Peaches. This broke Jerome’s heart because he’s the one who recommended Peaches for the job. 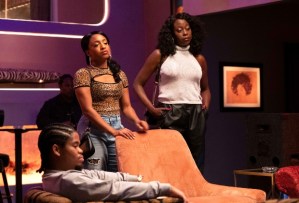 Per Dallas and Black Diamond’s street sleuth work, Franklin and his family also learned a fresh-out-of-prison Kane, Kevin’s older brother, was the one who had tried to have them killed. Turns out Kane knew Franklin killed Kevin, and he wanted Franklin’s throne, money and most of all, revenge.

Making matters worse, Veronique left Franklin and said they could work together but couldn’t be together because his world was too unsafe for her and their unborn baby. This was made all the sadder because Franklin became weepy when he saw the baby thriving on the ultrasound screen.

What did you think of the tiger and all the madness of this week’s Snowfall? Do you think Franklin and Leon can defeat Kane, and at what cost? Drop your thoughts in the comments.