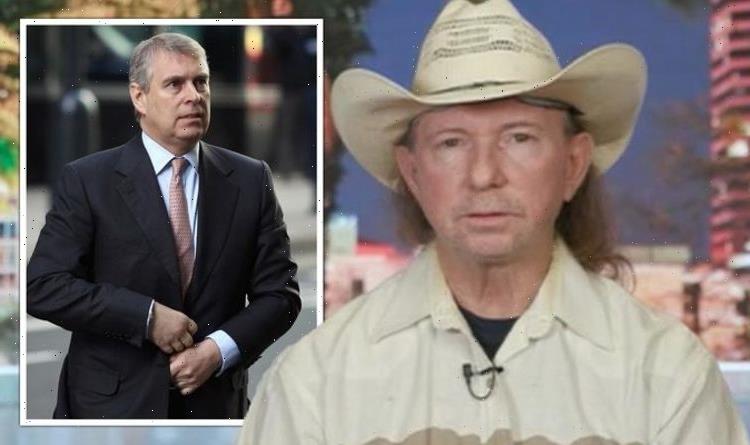 Lawyers for Ms Giuffre claim Prince Andrew has been served with a lawsuit from Virginia Roberts Giuffre, who alleges she was forced, by Jeffrey Epstein to have sex with the royal when she was 17 years old. Prince Andrew has vehemently denied all claims.

Asked by Good Morning Britain host Richard Madeley if Ms Giuffre wanted a settlement or to see Prince Andrew in court, Mr Roberts replied: “I think she needs to do both.

“She needs to hold him accountable for all of the actions that he’s done.

“I’m very proud of my daughter to step up and put this civil suit against him.

“He knows what he has done wrong and it’s like I’ve been reading this last week that even trying to service him papers, he was instructing his guard to tell them not to accept any court papers.”

Prince Andrew’s lawyer, Gary Bloxsome, has insisted correct procedure was not followed because the court papers needed to be served through a British court official.

As this was not done, Mr Bloxsome said it meant the Duke of York had not been served the papers correctly.

On Monday, a US judge will determine if the court papers are in fact “served” before any case can get underway.

Mr Roberts went onto allege: “An innocent man wouldn’t do that. Only a guilty man does that. If he’s afraid of something, if he’s innocent, why block these papers coming to him for this civil suit, I’m just proud of my daughter and that she’s actually going after him for this.”

However, whilst Mr Roberts was giving his personal opinion about the case, in fact Ms Giuffre has only brought civil proceedings brought against Prince Andrew.

There is no suggestion of any criminal charges being brought against the royal regarding Giuffre’s allegations.

Madeley explained: “His second line of defence, according to what we read here, as well as trying not to accept the papers being served on him – is when that happens, and it will happen in the end – the judge may well say today that as far as he is concerned, they’ve gone to the police with these papers. He has been served with them. But we will come to that later.

He went to to detail “His other line of defence is again a technicality, is to open up a private agreement that your daughter reached with Jeffrey Epstein, quite a few years ago now, where she took a settlement from him and agreed not to go after him any more or some other members of his circle that she had alleged assaulted her sexually.

“Can you shed any light on that? Do you know if Prince Andrew is mentioned in that settlement document that was signed all those years ago.”

Mr Roberts answered: “I don’t know if that was in there or not.

“Whether he goes to court or sees the judge, he should be held accountable.

Mr Roberts went on to allege “My daughter was sexually abused by Prince Andrew, so I think that’s even more important – I think she wants both, a settlement and to see him served.”

“As a father what would you like to see happen to Prince Andrew?”

Madeley asked. “You obviously believe in your daughter’s account, you believe Prince Andrew is guilty despite his vehement denials. What would satisfy you as a father? What would you like to see happen?”

Mr Roberts told the hosts: “I would like to see him go to prison for at least a little while.

“He needs to know what it’s like to be held accountable for his actions.

“My daughter just happened to be in the wrong place at the wrong time.

“Prince Andrew was friends with a known paedophile. He’s been to his ranches, New York – there’s pictures of Prince Andrew and Jeffrey Epstein together everywhere.

“As far as documents with them together, I have no idea, but he needs to be held accountable.

“These are not the times of William Wallace where royals can do whatever they want. The times have changed. Prince Andrew thinks it’s still those times – that he can do whatever he wants.”

When asked about whether he had any idea Epstein was a threat to his daughter when he’d drop his daughter at Epstein’s house, Mr Roberts said: “No, I had no idea.

“I met Jeffrey Epstein when she first started working for him, but it was supposed to be massage therapy.

“I thought, ‘That might be a good job to learn.’ When I met him, he was just in jeans in front of his mansion and just seemed like a regular guy.

The case Ms Giuffre has brought against Prince Andrew is civil only and there is no suggestion of any criminal charged being brought against the royal regarding her allegations.

He stated: “It didn’t happen. I can absolutely categorically tell you it never happened. I have no recollection of ever meeting this lady, none whatsoever.”

Buckingham Palace previously released a statement to say: “The Duke of York unequivocally regrets his ill-judged association with Jeffrey Epstein.

“Epstein’s suicide left many unanswered questions, particularly for his victims. The Duke deeply sympathises with those affected who want some form of closure.

“It is his hope that, in time, they will be able to rebuild their lives. The Duke is willing to help any appropriate law enforcement agency with their investigations if required.

“The Duke has already stated that he did not see, witness, or suspect any behaviour of the sort that subsequently led to Jeffrey Epstein’s arrest and conviction. He deplores the exploitation of any human being and would not condone, participate in, or encourage any such behaviour.”