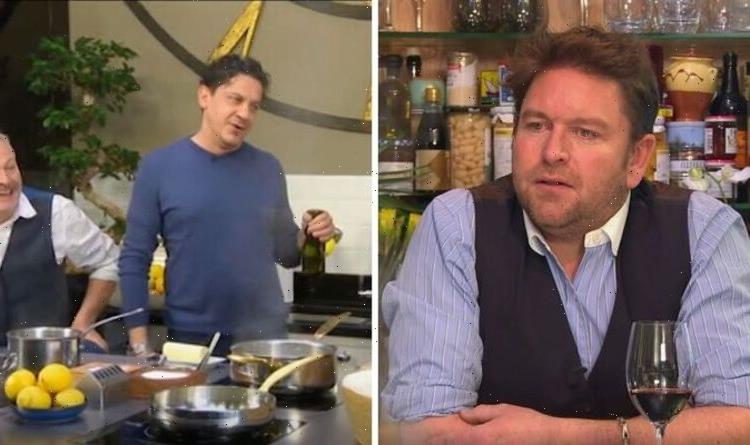 James Martin was cooking up a treat in the kitchen and was joined on his ITV show James Martin’s Saturday Morning by guests Denise Van Outen, Francesco Mazzai and Nick Nairn. Sitting down to enjoy the cooking, the host of the show made a blunder and jibed at the Italian chef as he prepared his pasta dish.

Putting his feet up, James took the opportunity to step away from the hob and tuck into some fine Italian cuisine.

Francesco prepared for James and Nick a pasta dish of Fettuccine with Grana Padano and Black Truffle.

Before things got going, the host quipped that Nick “snuck in” as he “saw the massive piece of cheese” on the counter.

Starting to cook his dish, the guest chef discovered that the olive oil in the kitchen was not Italian.

As he continued to cook, James asked the chef where in Italy he was from, and he replied: “I am from Calabria, the south of Italy.

“It is known for the most amazing soft, spreadable salami called Nduja.”

Fellow guest Nick knew that name that prompted Francesco to say, “Bravo, I love this guy.”

James added: “It’s known for the Godfather as well, isn’t it?

Jumping over the end of James’ sentence, he replied: “That’s Sicily man.”

The trio burst into laughter over the location blunder.

Francesco added: “I have a Sicilian wife, I should be careful of what I’m saying.”

Referencing an iconic scene from the gangster film Nick chimed in: “The horse’s head is being delivered as we speak.”

Earlier in the show, he cooked performer Denise some paella as the star spoke about her new book.

Admitting that he had been friends with the actress for “20/30 years,” he said how he admired her “drive” and career determination.

Her career has seen her perform on TV and from the West End to Broadway.

Linking it to her book, she said: “I was on Broadway not long after being heartbroken.

“The show was amazing, but I wasn’t in an amazing place.”

Talking about living near Columbus Circle in New York, USA, she added: “When you have heartbreak, it takes over everything.”

James Martin’s Saturday Morning airs weekly at 9.30am on ITV.