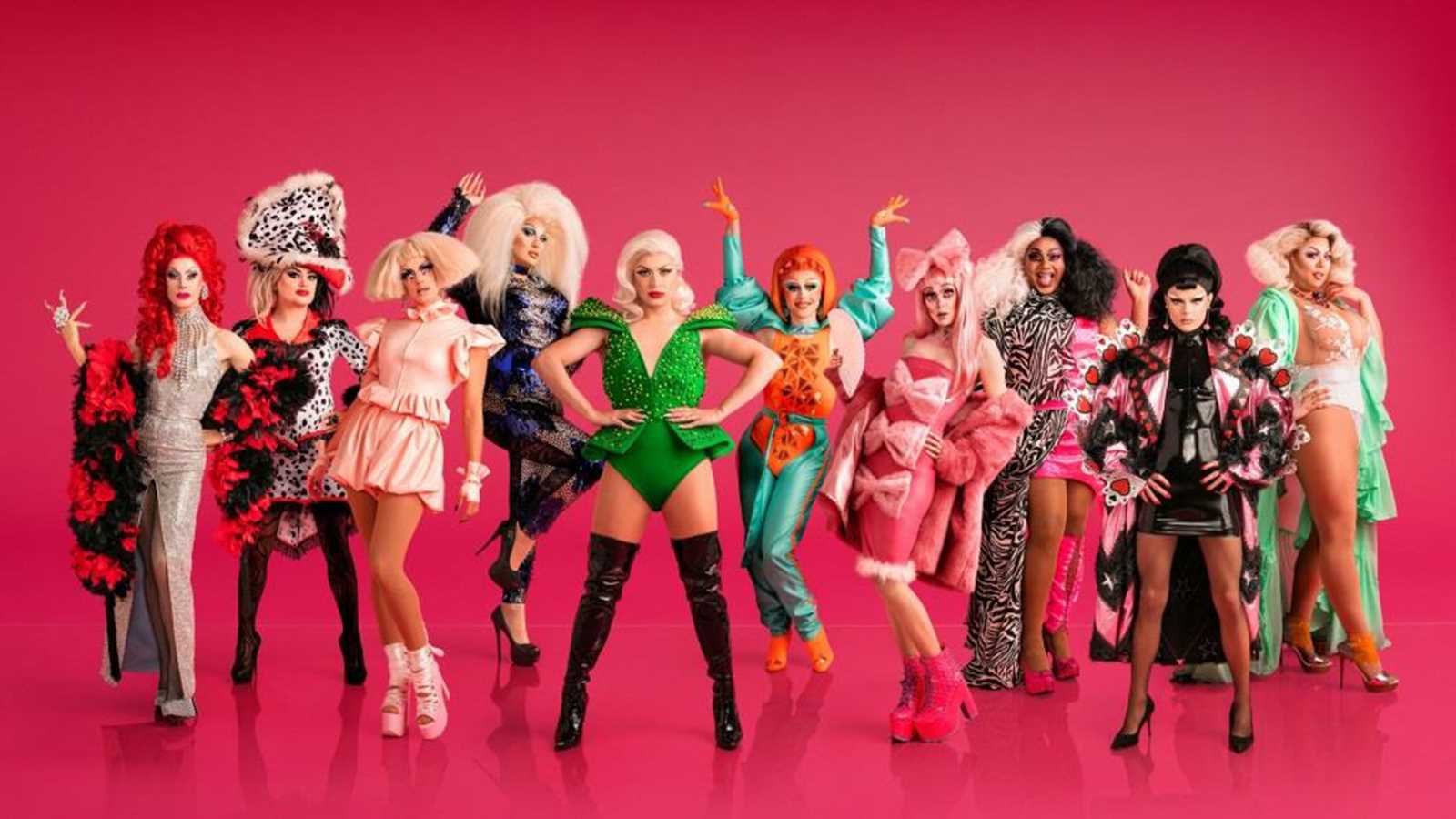 Bow down, squirrel friends! All hail the reigning queens of RuPaul’s Drag Race UK, all 10 of whom will compete on the international version’s first season when it premieres this October on BBC Three. On Wednesday the network unveiled the stunning roster of ladies — each handpicked by Mama Ru — going wig-to-wig for the Drag Race franchise’s first British crown, including an eclectic mix of comedy queens, lewk ladies, and diva extraordinnaires.

Ahead of the show’s debut, read on for an official first look at the RuPaul’s Drag Race UK cast members.

Comedy queens of the world, rejoice, as one of your own will sashay into the U.K. Werk Room proudly wearing her humorous chops on her ruffled sleeves.

“Baga Chipz is a pub queen; tart with a heart; like someone’s auntie, I give advice on how to pull fellas and how to get pissed. I’m not one of these gorgeous, beautiful Kate Moss lookalike drag queens. My style is more cabaret, old-school, sequin frocks, Shirley Bassey, Danny La Rue, Lily Savage kind of drag,” she says, adding that she feels her greatest moment could come during the Snatch Game challenge thanks to her performative instincts. “My greatest strengths are my comedy and my wit. I’m a live performer and I do my own material. I might not have the best outfits or makeup, but put me on a stage and I will entertain the absolute sh—e out of the room.”

Intellectual glamour will blossom on Drag Race UK thanks to Blu Hydrangea’s green (okay, multicolored) thumb, as the 23-year-old describes her aesthetic as “a General Certificate of Secondary Education art project, high fashion from outer space, a cartoon character — with muppet realness.”

Whatever that means, Blu assures she’s here to slay lewks, particularly those on her mug, as she’s a seasoned makeup artist with a passion for innovation.

“Blu’s greatest strengths are her makeup, which is always flawless, my lovely outfits and my creative drive. I love to be outside the box, not just one of those queens who says they are outside of the box; I am outside of the box. One day, I might be a beautiful lady and the next I might be a pineapple,” she says, admitting that her sewing and comedy skills aren’t the strongest, but she’ll push forward by using unconventional materials to create unorthodox garments. “By day I am a makeup artist, and I think that will give me an edge in the competition because I know that Michelle and Ru will be looking for someone that is polished, well put together, and will wear that crown and look gorgeous, and that’s me!”

Though death drops are absolutely out of the question, expect old-school, diva-sized attitude and vocals from Divina De Campo, a self-described purveyor of the “sequin dress, big wig, big lash, and approximate face.”

The 35-year-old cites drag icon Divine as a guiding influence, as well as the dressings of opera and Italian aria. She also has a falsetto range as a live singer, so she’s sure to ace any singing challenges Drag Race UK throws her way.

While she radiates star qualities of yesteryear, she doesn’t limit herself when it comes to performing. She once literally dove head-first into a rendition of guest judge Cheryl’s Calvin Harris-produced bop “Call My Name” with bloody good results.

“She does a swan dive on TV [performing the song], so I ran out into the audience and head-butted some fixed seating,” Divina remembers. “My eye just exploded everywhere with blood, and I just carried on singing. Then, I gave someone a birthday cake and stood with blood everywhere, trying to hold the cake far away so I didn’t bleed on it. I finally put a plaster on and drew my eyebrow over the top and finished the show, until I went to [the] hospital at the end to get stitched up. A proper drag adventure!”

Crystal stands to join the ranks of Pearl, Jujubee, Raja, Katya, and more as the mononymous franchise legends who’ve earned their singular monikers through jaw-dropping looks and performative skills. But, the Canadian queen — who’s lived in Britain for the past 10 years — considers herself to be more of a “gender-bending” oddity than a straightforward showgirl.

“[I’m a] ‘mess with your brain’ kinda drag queen,” she explains. “She stands for tearing down gender constructs using creativity, looks, and fashion and crazy performances. I do aerial circus, I can crack a whip, put cigarettes out on my tongue — it’s a freak show. It’s unexpected. It’s nothing you have ever seen before.”

Like Miz Cracker before her, the 30-year-old Birmingham native knows her drag name is provocative.

“When I started doing drag five years ago, I wanted a name that was cheeky but also reflected my British Vietnamese heritage, so I browsed the internet and came across a meme about an American news report which turned out to be a prank,” she says, referencing a July 2013 incident in which a news program broadcast fake names of the pilots manning the ill-fated Asiana Flight 214. “It was about a missing Asian plane and all the names of the missing crew were plays on Chinese names, such as ‘Sum Ting Wong’ and ‘Wi Tu Lo,’ and another was ‘Ho Lee Fuk’. It was wrong in so many ways, and that was why I chose my name, as my an own act of reclamation!”

It’s a bold start for the vocally talented queen, who wants to break down racial stereotypes.

“Asian is who I am, but does not define who I am. I want to show you that I’m a queen like anyone else,” explains the 30-year-old. “This isn’t easy for me doing this. I’m first generation born here. I didn’t speak any English until the age of 3. I live an oriental Chinese Vietnamese background, so going from that and being told I need to go to school, university, you need to get good job, you need to get married, have a house, kids. I am none of that. I have decided to go against everything that I have been brought up to do, because deep down before I was a drag queen I was unhappy. This is the first time in like 30 years that I am doing something I actually love. People talk about representation all the time, but if a little Chinese homo is watching this at home and sees me [I hope he] thinks, Wow, I’ve been brought up to do those things too.”

With a name riffing on a popular singer (and Drag Race UK guest judge) and self-described ace death drop and dancing abilities, the blonde-and-beautiful Cheryl Hole seems like the perfect fit for the franchise’s new crown.

“Everything’s got a bling, a touch of vajazzle, but a real girl at heart. I like to play up the Essex stereotype and really incorporate that into my drag,” says the performer, who takes her Cheryl appreciation one step further as a member of the Girls Aloud parody group Gals Aloud.

But, just because she’s beautiful on the surface doesn’t mean her competitors shouldn’t fear her cutthroat spirit.

“I am a lip-sync assassin, and I’d like to see any of these girls try and out-lip-sync me as this is what I do,” says the 25-year-old, who also holds a degree in dance. “I’m quite well known for my death drop and dancing skills so girl you better watch out as I’m gonna bring the exclamation mark of the dance moves to the dance floor!”

A party girl like Courtney Act at heart but a glam-goth mistress like Sharon Needles on the surface, Gothy Kendoll puts on a show on her body and on the stage.

“My drag is dark, contemporary, striking and unique, and everything that is cool and fresh about U.K. drag now,” observes the DJ and party host, who also studied fashion before experiencing her biggest drag snafu of all time: “I think my biggest mishap was about the third time I did drag. I went out with a leotard with no pants dancing the night away. My friend just said ‘Sam,’ and looked down. Then, my knob was out, balls and everything. When I found I tucked it away and carried on dancing. I didn’t care.”

As a result, you can bet this avant-garde queen doesn’t even tuck like other queens.

“After that I’ve made sure I tuck my balls away — not full on tuck though,” she continues, continually resisting convention. “I’m not having my balls in my stomach — that’s disgusting.”

“It’s great to be able to take drag from a small idea to the West End and hopefully beyond that,” she says. “I did dance with Michelle Visage every single night, but I’ve already been clearly told there’s going to be no favoritism and this will be a level playing field. She won’t be allowing me any airs or graces when it comes to RuPaul’s Drag Race UK. I better come correct!”

Meet the youngest queen of Drag Race UK, 20-year-old Scaredy Kat, who describes herself as “very pink, very cute, and very feline-esque,” like a “nervous flamingo.”

She’s admittedly inexperienced compared to the other girls of the season, but she’s honed her own sense of style in her small town, where the only gay bar in operation was shut down before she could fully blossom as a young drag queen. Thus, the youngster turned to performing drag in internet videos posted, though she hopes the competition will help her improve her attitude on a worldwide stage.

“My greatest strength is probably the fact that I’m terrified of everything. I also have okay makeup skills, I guess,” she says. “I think being the youngest queen is a blessing and a curse. I haven’t got masses to prove, but then again I’ve got barely any experience. I’m hoping the others will underestimate me, especially, because I look this cute.”

“My style is like a scouse wife who has come into money, she moved to L.A. and blew it all, and then she’s had to move back to Liverpool,” says the Vivienne, a self-proclaimed comedy master who’s aced vocal impressions of celebrities from around the world. “I like to have a really fierce look, but I like to be hilarious on stage, so I’m kind of an old school and the new school put together, which I think works.”

Vivienne also has past Drag Race experience, as she says she was previously “crowned by RuPaul himself as the U.K. ambassador for RuPaul’s Drag Race,” which essentially involved being a hype girl for the American series’ presence overseas.

But her skills are so strong that Ru brought her back for the competition. When it comes down to it, “I can sing, I look good, I’m funny as f—, and I can drink a whole bottle of Jägermeister in 20 seconds flat,” Vivienne says, so if it’s good enough for her, it’s good enough for us!