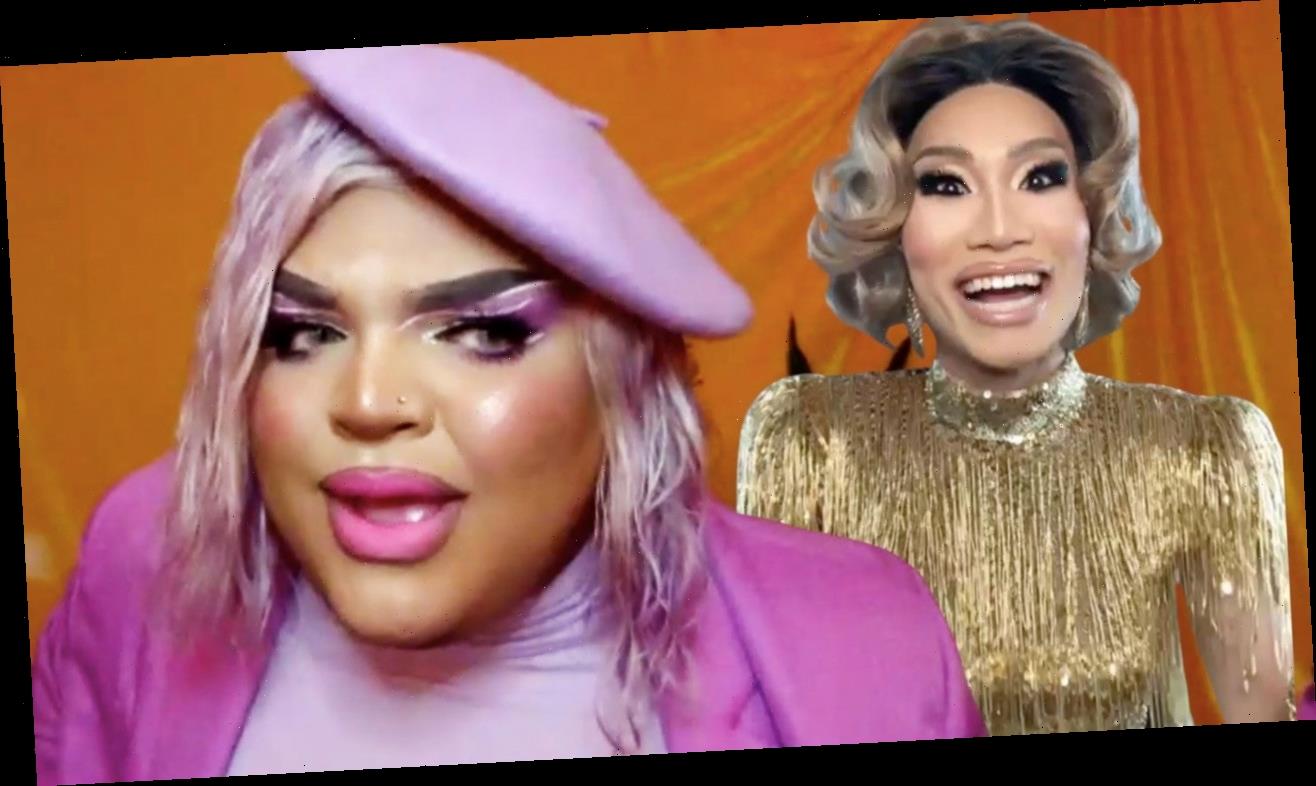 No need to contour for the gods, RuPaul’s Drag Race is getting a nip and tuck courtesy of the season 13 queens. So says the Dominican doll from New York City, Kandy Muse.

“When you ask someone, ‘What is your favorite season of Drag Race?’ They always go back to season 6. And, ‘What’s your favorite top three?’ Bianca, Courtney and Adore,” she tells ET. “Season 13 is right up there with season 6. Not just because I was there and I experienced it, but seeing the magic happening, seeing the gag-worthy sh*t that was happening? It’s the facelift that Drag Race needed.”

Those are some big heels to fill, but the queens of season 13 are up for the challenge: Not only braving a global pandemic, but RuPaul’s latest twist. “You definitely have to be on your toes at all times. More than ever before,” Gottmik warns. “They got us good many times.”

ET’s Brice Sander Zoomed with the 13 queens of season 13 to discuss that lip sync for your life surprise, filming during our ongoing pandemic, and the best advice they received from former Ru Girls.

Y’all wanted a twist?! Usually Mama Ru waits until all the queens have arrived to drop a bomb, but this season’s girls receive what they’re calling “the ultimate gag” right away: Two-by-two, they must immediately report to the main stage to lip sync for their lives — or receive The Pork Chop.

Denali: Face crack. Body crack. All the crack cocaine, everything. In my opinion, it’s probably the most exciting first episode of RuPaul’s Drag Race ever.

Gottmik: Every other season, RuPaul’s not even talking to you in your f**king entrance looks, so I was backstage like, “Is that RuPaul saying my name right now?!”

Elliott with 2 Ts: And it was crazy, too, seeing all the judges. You just don’t expect that. You always think you know what to expect when you come into this show, but every year, they say you have no idea what’s going on and you don’t.

Tina Burner: No other season has had such a twist so soon. Literally, we walked in on that rug and it was pulled out from under us. We didn’t have to death drop, we were just on our backs going, “WTF!” I’m excited to watch some good battles. It’s Game of Thrones-style, honey.

Olivia Lux: A lot of people tune in specifically for the lip syncs for your life, so to have six off the bat is absolutely wild. You get to see everybody in their element performing before you see anything else from them in the season.

Tamisha Iman: I was not ready. I was physically not ready.

This year’s coronavirus ruveal may have affected the rollout of season 12, but its successor was actually filmed amid the pandemic under COVID-19 health and safety precautions, including quarantining the queens while shooting and regular testing for contestants and judges alike.

Denali: This year was really intense, mentally, for all of us. Obviously, having to do Drag Race through a global pandemic was really mentally difficult and taxing. What surprised me is, honestly, what I could mentally handle. I was just going off adrenaline. After the whole thing happened, I was like, “Wow, I really did all of that.” I’m very proud of all of us for handling it mentally, because it was a really, really difficult season to film.

Tamisha Iman: It was.

Rosé: For myself, RuPaul’s Drag Race is such a challenging experience for anyone who competes and I didn’t even imagine that it would feel the way that it felt to actually partake in the filming process. But something that I learned about myself and something I’m so proud to know now is that I’m a lot stronger than I previously gave myself credit for.

Tina Burner: And the love and support from everyone has been amazing. It’s such a hard time everyone’s having right now, so to have a positive message and love coming in, it’s great and it’s healing. And I think that’s what we’re here to do as drag queens. We’re here to heal the world and make them laugh a little bit.

Kahmora Hall: Yeah, I didn’t realize how hungry people were for season 13. Because there’s so many seasons, like, pumping out left and right, we thought people would get Drag Race fatigue. But no, we’re getting such great response to it. It’s validating too. Like, “Wow, we filmed this during the pandemic just to entertain you all,” but, like, we’re also, like, happy to be, like, the highlight of your week.

Season 13 is keeping it all in the family: Kandy was Aja’s drag daughter, Kahmora, is Soju’s drag mother and Tamisha is Kennedy Davenport’s drag auntie. The other girls each have their own connections to former Ru Girls, providing the perfect opportunity to receive some sisterly advice.

Gottmik: I think the advice that helped me the most was definitely don’t give a f**k what anyone else is doing at all times. Like, only focus on yourself, because the second I would ever see myself be nervous or start to stumble was when I was looking at the other girls in the room. If I was just focused on myself and had my eyes on the prize, it was golden. [That was from] Detox and Laganja [Estranja]. Laganja went through it her season, so she was definitely hammering that into my head.

Denali: Naomi Smalls was like, “Just make sure you get a wig line that’s really super plucked, so you look fab on TV.” And Shea [Couleé] gave me a lot of great advice and was very much just saying, “Go on there and be adaptable, because anything can be thrown at you and you have to be a chameleon.”

Rosé: You really have to, like, kind of figure it out on your own, because everybody’s experience is different. There is one thing that was outstanding in the book of advice I received, and it was from Jiggly Caliente. Jiggly sent me a message, and she just said, “Girl, get a good beard cover.” [Laughs] And I did.

Elliott with 2 Ts: I was told by Coco Montrese and Alexis Mateo, “Don’t tell anybody right off the bat what your strengths are,” because it will always be a set-up. You will always have an expectation then set on you. So, go in and feel it out at first and then let your strength speak for itself when the time comes.

Joey Jay: Trixie [Mattel] and I are both from Milwaukee, and we were on the phone on my way to the airport, actually, and she said, like, “You’re a performer. You’re a lip syncer. They’re going to eat you up. Don’t try to be someone that you’re not, because you never want to potentially get sent home not feeling like you.” I walked into the show and was like, “I’m gonna give ’em Joey Jay head-on and watch the f**king feathers fly.”

LaLa Ri: Phoenix told me to be [my]self fully. Don’t try to twist and turn for the drama and all that. Just be yourself, honey.

Kandy Muse: Right before coming to Drag Race, Aja pretty much told me to be myself and have a good time and just enjoy the ride because it’s gonna be a wild one. And just really bask in the moment. Dalia told me to go home first. So, we’ll see how that goes.

Thirteen seasons in, RuPaul is still making herstory: Gottmik is the first trans man to compete on the show. “Born a girl, transitioned to a guy, dress like a girl for money,” as he puts it. Gottmik’s casting marks an important breakthrough for more inclusion on “Drag Race” and for representation in general.

“It means the world to me, because I didn’t transition for a really long time because I never saw, like, a trans masculine guy be down to do makeup and have fun with their feminine side still,” Gottmik says. “So, for me to get to a place where my drag is comfortable enough to do that and to show it to the world just means so much to me and the fact that I am on a cast with all these girls that support me so much and just treat me like a normal f**king guy in a wig, it’s the best thing that I could have ever asked for in my life.”

You can’t make herstory without knowing your herstory though, so ET put the dolls through their paces by having them pick superlatives for the series’ best lip sync, most notable quotable and more.