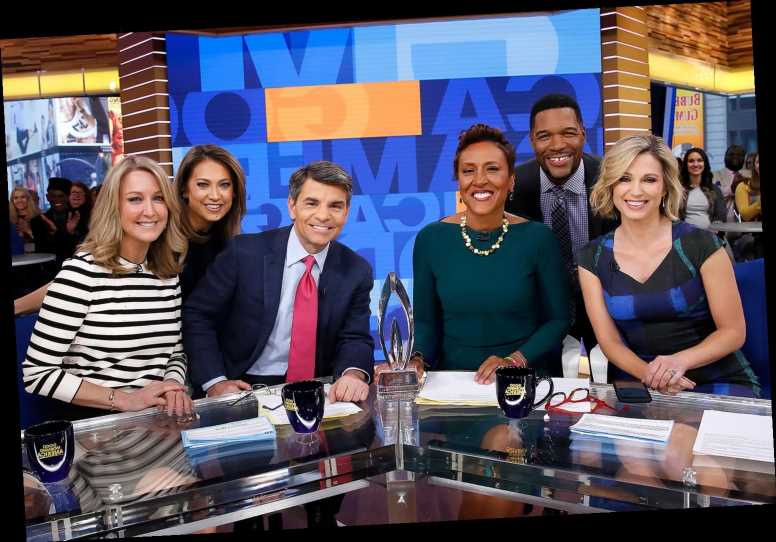 Robin Roberts is finding the silver lining in the hardships of the past year.

On Thursday's episode of the PEOPLE Every Day podcast, hosted by Janine Rubenstein, Roberts, 60, opened up about how being in lockdown for exactly one year now due to the ongoing coronavirus pandemic has actually helped she and her Good Morning America co-hosts — Michael Strahan, George Stephanopoulos, Lara Spencer, Amy Robach and Ginger Zee — grow closer.

"People really bonded," says Roberts. "We haven't been able to have a studio audience of course since all this happened. You know when you're hosting a party and you're with your family and you tend to tend more to your guests than your family? That's what we did with our studio audience, and now they're not here. It's like, 'Oh hey, George. Hey.' "

"We're always good, don't get me wrong," she adds of her GMA family. "But it's even made us better. Just the camaraderie is even stronger now." Roberts, who worked on GMA in the basement of her Connecticut home for seven months before returning to the New York City studio in September, says she applauds everyone involved in the ABC morning show for their hard work over the past year.

"I have to say I am just amazed at our entire staff, people who are still at home, the producers, the editors, being so creative in finding a way," she tells Rubenstein. "People were looking to us even more so for some normalcy. So much around them was changing and they wanted some things to stay the same."

Overall, Roberts said she couldn't ask to work beside a better group of co-hosts. "I'm just so grateful to have the people that I work with. This has been a hard year," she says. Want to get the biggest stories from PEOPLE every weekday? Subscribe to our new podcast, PEOPLE Every Day, to get the essential celebrity, entertainment and human interest news stories Monday through Friday. And hear more from Roberts, below.

Aside from her work family, Roberts also credits the extensive time she spent at home with her partner of nearly 16 years, Amber Laign, for helping her get through these trying times.

"We spent more time together this past year than in the previous 15 years combined," says Roberts. "A lot of people feel that way about the relationship, but we've never been stronger. I remember what I packed up part of my dressing room here and headed home to Connecticut a year ago. I'm glad I packed a lot of patience. Didn't pack much in clothes and some items here, but I packed patience."

She continues, "That's what I really learned this past year about being patient, about understanding what is really important and that I don't have to be on the hamster wheel all the time. I don't have to get on a plane. I hate that word stay in the moment, but it forced me to do that. I'm grateful." "I just really wanted people to know the full story about her," Roberts says of Jackson, who died in 1972. "We know that she could sing. She is the queen of gospel, but she was a business woman and she was all about civil rights. We decided to devote 40 of her 60 years. We take a 40 year chunk of her life and have it on display in the movie."

"She just really transforms herself," the TV journalist adds of Brooks' performance. "She said that she felt that she was destined to play her. I cannot wait for people to see her performance. It is absolutely beautiful."

Check out more from Robin's interview on PEOPLE Every Day, airing now on iHeartMedia, Apple podcasts, Spotify, Stitcher or wherever you listen to your podcasts.