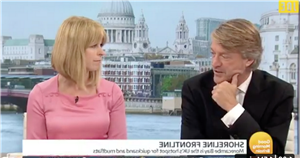 The former This Morning host, 64, who has previously stood in for Piers, will be accompanying Susanna Reid, 50, on the popular morning show in June which could become a permanent position if the “trial” goes well.

Richard has previously filled in for the role on the ITV show and has proven to be a hit with viewers in the past.

An ITV insider told The Sun: “Piers is nigh-on impossible to replace on GMB, execs accept this, but Richard has his own inimitable style.

“Like Piers, he’s a trained journalist who knows how to press guests and get a decent ‘line’ from interviewees.

“He shoots from the hip, says what he thinks, and in a genuinely brilliant, likeable chap off air – so it's very much a ‘watch this space’.”

The broadcaster opened up about the possibility of taking up the new role in a recent interview and admitted that he would be open to the idea and would be “bonkers” not to look at it.

Speaking to the The Metro, Richard said: “If the phone went and they said, ‘Would you come in and talk?’ of course I would talk to them.

“It would be bonkers not to. But I very much like sitting in for people. I have all the fun and very little of the responsibility or flak.”

Fans of the show have been debating who will replace Piers since he stepped down from the role in the beginning of March after almost six years presenting the show.

One fan joked: “Richard Madeley taking GMB’s call right about now,” while another tweeted: “So where’s the petition to have Richard Madeley replace Piers Morgan?”

Absolute Radio even chimed in on the debate, adding: “This morning’s #SocialAmmo features @RealDysonator’s favourite to take over from Piers Morgan … Richard Madeley, give the nation what they want.”

Meanwhile, Richard has claimed Katie Price should receive an honour from the Queen after watching her BBC One documentary, Harvey and Me.

The 64-year-old took to Twitter to share his views on the emotional documentary which followed the life of the mum-of-five and her relationship with her son.

“That woman should be in the next New Year’s Honours List for services to motherhood. What a testament to the sheer unselfish power of maternal love."

He went on to say he was “utterly blown away by her” and her dedication to Harvey and all his needs.

Fans are eagerly awaiting to see the infamous broadcaster back in the GMB seat in June, while they wait to hear further news from ITV producers.