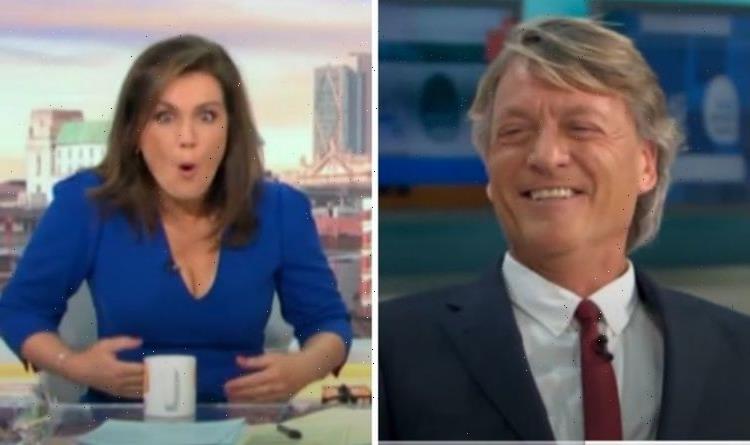 GMB: Susanna asks Richard about the cost of a ring

Good Morning Britain’s Richard Madeley explained he had bought his wife an emerald ring to mark their anniversary. After Susanna Reid asked how much it had cost him, he joked he had paid a shocking six-figure sum for the gift and a stunned Susanna was left astounded by the ITV broadcaster’s answer.

After discussing the hefty price US basketball player Ben Simmons paid for Maya Jama’s engagement ring, and Simon Cowell’s fortune after he proposed to Lauren Silverman, the hosts discussed how much they’d paid for jewellery themselves.

Entertainment reporter Richard Arnold asked: “How much was the ring you bought Judy?”

Richard replied: “It was our 35th wedding anniversary while I was in the castle, I left her with an emerald ring, so there.”

Susanna probed: “How much was the ring though?”

The 65-year-old laughed: “Of course not!” as his co-host breathed a sigh of relief.

Susanna teased: “That was almost all your fee, wasn’t it?” referencing how much he was paid to appear on I’m A Celebrity… Get Me Out Of Here!

He quipped sarcastically: “And well earned it was… over a couple of days.”

Later the pair joked about money once more as Richard placed a bet on who would become the next James Bond.

“Who’s next for Bond?” Susanna asked, starting the well-established debate.

Richard Arnold replied: “I think we’re going to have that heated debate for some time.

Did you get the feeling at the end of the last Bond, it felt like it was a clearing of house?

Susanna quickly warned: “No spoilers,” as Richard continued: “The new Bond is going to look very different, and by that I mean the franchise.”

As the entertainment reporter insisted “I don’t think so,” the host replied: “I’ll bet you a fiver.”