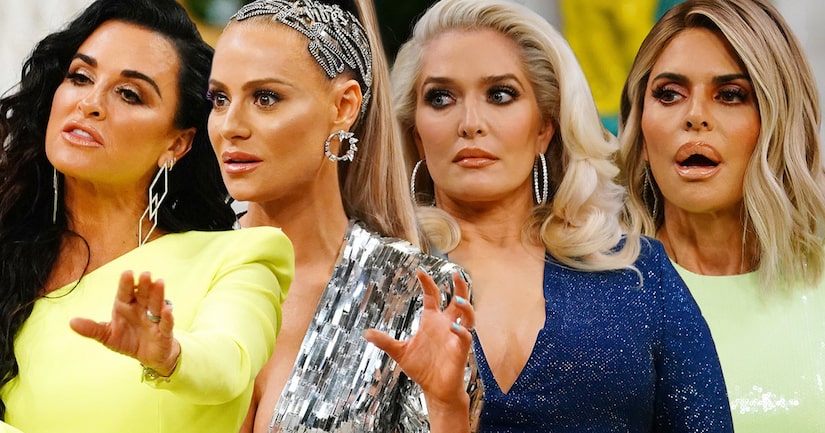 Kyle was furious. “My husband did not scam anyone!” she fired back at Andy.

Kyle subsequently dragged Andy Cohen for highlighting the issues on the show, and Erika ripped into him for asking Dorit what work she’s had done.

Lisa Rinna also had quite the response to accusations her daughter’s anorexia stems from her own eating habits, and Camille Grammer accused Kyle of saying some nasty things about Lisa Vanderpump off camera.

Read on for some drama-filled highlights from the episode.

Was PuppyGate Storyline an Attempt to Avoid Addressing Legal Issues?

Andy read off a fan question, which prompted a conversation about how the ladies don’t generally discuss their financial matters on camera. (That’s why when Camille brought up Dorit’s alleged issues, it was such a big deal.)

"Erika’s happy to talk about Lisa Vanderpump all day, but when it comes to Tom [Girardi] defaulting on a $15 million loan, she doesn’t say a word," Andy read from his cue card.

"How ’bout this," Erika barked back. "Resolved, and they apologized."

Andy then read off another question of similar sentiment. This one was aimed at Kyle. "Amy from Texas said, ‘I guess Kyle isn’t gonna mention Mauricio [Umansky] scamming someone out of $37 million when she can just talk about Dorit’s dog.’"

Kyle was furious. "My husband did not scam anyone," she fired back. "That causes problems because my husband’s never made $36 million on a deal in his life! That’s what a property sold for, okay? So your question from whoever the f–k Monty is in McGootville saying my husband’s scamming people out of $36 million…"

Fumbling through his cards, Andy interrupted, "Amy from Texas."

Andy tried to diffuse the situation by rephrasing his initial question, stating, "There’s a lawsuit relating to a dispute about a property."

"And that’s it — a dispute!" Erika chimed in, as Kyle said sternly to Andy, "Yeah, but the way it was worded is damaging, and I don’t appreciate that."

Looking over at Dorit, Andy pointed out that she, too, was being sued by her former Beverly Beach business partner. Dorit was much more calm than Kyle was.

"He wants a certain amount of money, and no, I can’t get into numbers because it’s an ongoing lawsuit," she replied.

"Andy, the judge has ordered mediation," Dorit later explained. "The judge looked at it and said, ‘Listen, you guys figure this out.’ I am very comfortable in our position. It is in the lawyers’ hands. It doesn’t need to have a discussion because there’s a lot of details about it that I can’t really speak about."

When Andy brought up a lawsuit that was recently filed against LVP for wrongful termination from Vanderpump Dogs (alleging she wanted the employee to sign John Sessa’s name on foundation checks), he asked the ladies if they thought she’d be willing to talk about that lawsuit if it had happened during the season.

"I doubt it, but I would not have brought it up," Kyle maintained. "I don’t want to hurt her business or hurt her. As a group of friends, we don’t say, ‘Hey, Erika, so what is going on with that thing?’"

"You don’t? I would. If my friend was being sued…" Andy tried to explain, before Kyle cut him off. "Well you would ’cause look what you do for a living."

When Andy played back the clips of Rinna’s daughter, Amelia Gray Hamlin, struggling with anorexia and the anger that accompanied it, she got choked up.

Rinna said she had no idea Amelia was planning to go public with her eating disorder on Instagram and that she "did it without asking me."

"It’d probably been going on for longer than we know, but when you physically see it, it’s undeniable," she said. "You can’t ignore it."

"When we had that barbecue, I think that that was a really pivotal point," Rinna went on, referencing the scene where Amelia unleashed on her dad over his cooking. When Andy asked what the appropriate response would have been from Harry, Rinna replied, "Well, from what the therapist told him when he went to see the therapist, she said, ‘You have to shut the f–k up.’ And those were the exact words that she said to him."

"Amelia’s gone through a lot in her anorexia," Rinna explained. "She’s quite healthy right now. Right in this moment. And recently, people have said, ‘Well, you don’t look anorexic. You’re not that thin.’ Which is a really big trigger. It’s f–king difficult."

Andy pointed out that viewers have seen Rinna "become defensive" whenever anyone points out her weight or eating habits, then asked point blank if she felt there was anything Amelia "picked up" from watching her mom’s relationship with food.

"Probably, yeah," Rinna confessed. "Do I have any food issues? I probably do ’cause I’m in this business."

When Andy asked if she thought she was addicted to exercise, Rinna said, "No, I don’t. Like, I probably work out three, four, five times a week, depending on my schedule. I’m just consistent. But I’ve been the same weight ever since I was 20? But I’m not bulimic, I don’t believe I’m anorexic. I mean, we’ve talked about it. I’ve gone to therapy. I can’t blame myself, but again, I blame myself."

Erika Rips Into Andy for ‘What Work Have You Had Done?’ Question

It’s no mystery the Housewives love their Botox and boob jobs, but Erika was sick and tired of being asked about it.

After Andy brought up Vanderpump’s mean-spirited joke about how Dorit’s had a "head transplant," he asked Dorit to clarify what real cosmetic procedures she’s undergone.

Andy explained, "I think since ‘The Housewives’ has begun, one of the tropes, I think, that is common among every city and every franchise is women chasing the fountain of youth and trying to look better and look great."

Erika and Rinna, who were seated next to each other, simultaneously shouted, "But what’s wrong with that?!"

"This is how I choose to live my life. However I choose to alter my body or present myself…" Erika explained, before Andy interrupted, "But where is the judgement?"

"From others!" Erika shot back.

Andy turned his sights back to Dorit, who visibly appreciated what Erika had done for her. She was "very happy" to reveal she’s had "a little Botox and filler," nothing else. No face lift, no nose job. "Makeup can do wonders," she insisted.

When Andy brought up the idea that LVP’s been "very open" about the work she’s had done, the group let out a collective laugh. "Reeeeeally?" Dorit asked.

All season long, the ladies have called Camille out for being two-faced with Vanderpump, saying one thing to her face and to the press, and something else behind her back.

"Here’s what happens," Kyle said to Camille. "When we’re together, you will say things like, ‘I know who Lisa is, she’s done this to me, she’s done that.’ And when you’re not with us, you’re like, ‘Lisa, I feel so bad with what you’re going through.’"

"Can I feel both? I can feel both," Camille fired back, but as Dorit pointed out, "Not if they contradict one another."

"You’ve got to have conviction," Kyle continued. "Okay, my conviction is I felt terrible that her brother passed away," Camille said, eliciting groans from everyone else.

"What human wouldn’t?!" Kyle fired back. That’s when Teddi Mellencamp blurted out, "But you can still say she has terrible breath and her gums are receding?!" Those were only some of the comments Camille made behind LVP’s back on the show.

"That was a joke, and you all laughed! And you all laughed!" Camille shouted and then pointed at Kyle. "And you continued with the conversation and said, ‘Yes, don’t get me into it, but she’s always had bad breath.’"

As Kyle shook her head no and fumbled for the right words to say, Camille continued, "Yes, you have! That is bullshit! You’ve talked about that off camera with me!"

Kyle was stunned. "Camille, that’s such a f–king low blow," she hurled across the couch. "We’ve all said things privately about each other. I would never out you! If I did right now, it would be a very bad situation. I don’t do that!"

Camille then accused everyone of talking poorly behind their castmates’ backs, which no one denied. Kyle’s point was that they don’t then bring up those conversations in front of cameras. She also wanted Camille to understand that the "two independent thoughts" she claimed to have in regard to Vanderpump were contradictory to one another and therefore painted her in an untrustworthy light.

Before the episode even aired, Kyle took to Instagram to urge viewers to read her blog and catch her subsequent appearance on "Watch What Happens Live with Andy Cohen."

"I have A LOT of thoughts on tonight’s Reunion," she captioned a screenshot from the episode. "My face also looked like this while watching the episode at home. I’m going to attempt to write a blog (which I haven’t done in a while) because I think some of this needs to be addressed #rhobhreunion See you tonight on #WWHL."

I have A LOT of thoughts on tonight’s Reunion. My face also looked like this while watching the episode at home. I’m going to attempt to write a blog (which I haven’t done in a while )because I think some of this needs to be addressed #rhobhreunion See you tonight on #WWHL

Stay tuned! We’ll keep our peepers open for both.