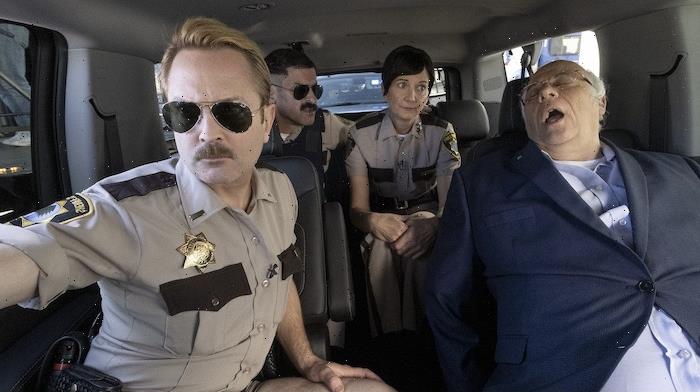 Hike up your short shorts and get ready to ride like a bike cop over to Roku, because that’s where your favorite police mockumentary show, Reno 911, is headed.

Quibi actually landed more Emmy nominations than some existing streamers this year, despite the fact that it already went the way of the dodo last December. That was bad news for Reno 911 fans since Quibi had revived the show after its cancelation 11 years prior on Comedy Central.

Never fear, for Variety has broken the news that Reno 911 will live on in an eighth season, courtesy of Roku. Collider also notes that Roku “has ordered full, 30-minute episodes” of Reno 911, in contrast to Quibi’s short-form approach, which reduced the episode lengths to 5 or 10 minutes a pop.

We recently reported that The Roku Channel was rescuing Zoey’s Extraordinary Playlist, the NBC musical dramedy, with a holiday special. One of our Twitter commenters replied, “The Roku Channel? What the hell is that?”

Well, the way things are shaping up, it appears to be the place where old dead comedies go to live again. As of August 2021, Roku has over 55 million active user accounts. Put that in your pipe and smoke it, all you Roku doubters!

The Path of the Bike Cop

Before there was Wellington Paranormal, there was Reno 911. Created by Thomas Lennon, Robert Ben Garant, and Kerri Kenney-Silver, all of whom starred as bumbling police officers on the show, Reno 911 spoofed reality legal programs like Cops. The show debuted in 2003 and ran for six seasons before Comedy Central gave it the axe. Like a good crowd warmer in stand-up comedy or in front of a live studio audience, it helped pave the way for other TV mockumentaries like the American version of The Office and Parks and Recreation.

On Comedy Central’s YouTube channel, you can see Lt. Jim Dangle, played by Lennon, in a bicycle helmet and white cowboy boots, spending one full hour trying to disentangle his bike from a lamp post. Lennon and Garant also co-wrote the Night at the Museum flicks and co-authored the screenwriting book, Writing Movies for Fun and Profit: How We Made a Billion Dollars at the Box Office and You Can Too!

Paramount and A&E pulled the plug on Cops and Live PD last summer in the wake of the George Floyd protests, leaving a gap to fill in the market for police ride-alongs (or at least well-meaning spoofs of them). If you want to ride along with Lennon, Garant, Kenney-Silver, and their fellow Reno 911 officers again, you can do it on Roku.