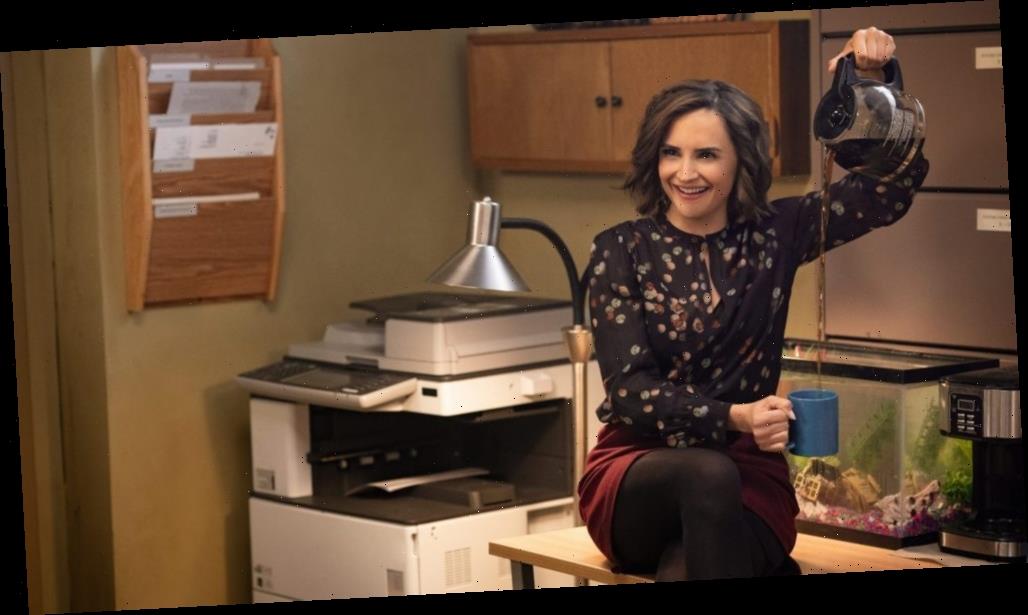 “She’s All That” changed Rachael Leigh Cook’s life. The 1999 teen romantic comedy — a modern-day retelling of “Pygmalion” — starred Cook as Laney Boggs, a homely, artsy outcast who transforms, in late ’90s parlance, into a “total hottie” and captures the heart of the high school heartthrob, played by Freddie Prinze Jr.

When the movie opened in theaters, it grossed $103 million worldwide, birthed a chart-topping soundtrack (thanks to Sixpence None the Richer’s “Kiss Me”) and made both of its leads into sought-after commodities in Hollywood.

It’s an experience Cook, now 40, looks back on with nostalgic fondness.

“I’m just grateful every day that I didn’t come of age in the era of camera phones, and yet, that makes me sound way more scandalous than I actually was,” says Cook, who started acting professionally at age 14.

But Cook still grapples with how to describe the formative years of her career. Pursuing acting professionally at a young age meant sacrificing a “normal” high school experience. “Like, how can anyone summarize a time in history, to me, that felt like leaving the teen years that I had promised myself when I was very young in favor of ones that I was told would be better,” she says, “but that, ultimately, left me questioning myself on a day-to-day basis as much as any typical quote-unquote ‘high school experience’ ever could have? I mean, if you want to throw yourself under a microscope, Hollywood’s the best way to do that.”

“She’s All That” was executive produced by Harvey Weinstein, then-head of Miramax. Cook starred in several films at the indie studio, including “Strike,” “The House of Yes” and “Blow Dry.”

Cook says she does not remember Weinstein’s presence on the “She’s All That” set and recalls only having one or two meetings with the disgraced mogul, who is now serving a 23-year-prison sentence for rape and sexual abuse. At those meetings, she was always accompanied by her female then-manager, who Cook believes was protecting her from Weinstein’s predatory behavior.

“Absolutely, with every fiber of my being I know that,” Cook recalls. “He was someone who people spoke about in a different tone, but it was years before I knew why.”

Cook would go on to star in a string of films from the early 2000s, including “Get Carter” and “Josie and the Pussycats,” which failed to make a box office splash.

Not that Cook was ever really chasing a career in commercial films. In 1997, two years before “She’s All That,” she portrayed a younger version of Parker Posey’s character in “The House of Yes,” introducing her to Posey’s work and the world of indie film.

“As only a teenager can do, I immediately wanted to be her,” she recalls of Posey. “So, I was deemed marketable for a certain time, and I was aware of that. Yet, all I wanted to do after being acquainted with Parker’s work was to be considered fringe and cool. I chased that image for myself.”

She shifted her focus to making independent films, such as 2003’s “Tempo” and 2004’s “Stateside.” The career pivot  — from mainstream rom-com icon to indie darling — is one she looks back on with clarity.

“Was it a good idea? Probably not,” she observes. “But at the same time, independent film was really thriving at that time. And so, in that sense, I had a really creatively, tremendously fulfilling time because my presumed ‘dollar valuation’ could equate to much more interesting roles than I would have gotten otherwise because I was not a formally trained actor. Chasing down a career in possibly more commercially viable films just seemed — I don’t know. It seemed interesting but not as interesting to me at the time.”

Cook also remembers being encouraged to produce her own projects. “Probably every 10th meeting I was on, somebody would try to lean in and say, ‘Hey, I like you. I think you’re great. You’re doing good work. Let me just tell you, I think you need to make your own stuff.’ And I didn’t really understand what they were saying if I’m completely honest,” she says. “But what they’re trying to say was, ‘The town that’s feeding you today is not going to feed you for the rest of your life, and you need to rise up and make your own way.’ It took me 20 years to realize that, but I know it now.”

It’s advice she has taken to heart as she has returned to her rom-com roots. Since 2011, Cook has lent her producing chops to a slew of projects, including her latest “Love, Guaranteed,” debuting on Netflix Sept. 3. Cook also stars in the film as Susan, a single lawyer representing bachelor Nick (Damon Wayans, Jr.) in a lawsuit against an online dating service for not fulfilling its promise of “guaranteeing love.” She tackles the part with the same characteristic charm and every-girl relatability she did as Laney Boggs 21 years ago.

The film’s plot, Cook says, was inspired by a lawsuit filed against beer brand Coors Light for not being brewed with “pure Rocky Mountain spring water” as had been advertised, as well as her own fascination with the lofty promises made by dating services of meeting The One. A fan of reality shows like “Indian Matchmaking” and “Love is Blind,” Cook is also no stranger to online dating. She and her co-star Heather Graham would pass the time on-set tinkering with Cook’s profile and swiping on potential matches, in the name of research.

“We couldn’t help ourselves from looking and surveying and exchanging observations about what makes someone appealing,” she says. “It’s beyond fun. It’s the fastest, most entertaining way to get to know another human that I can think of.”

Cook’s next project is less rom-com, more “Twin Peaks.” She recently wrapped shooting the pilot for scripted series “Nowhere” at a monk monastery and former spiritual retreat on the Fox River in Wisconsin. Cook says going into production during the coronavirus pandemic has meant routine tests (she’s done the nasal swab three times) and living in the equivalent of the NBA bubble “but with a far less athletic crowd.” Working with fellow actors has taken on a more resonant meaning for her, like when she had to hug someone in a scene.

“The simple act of hugging another human who I didn’t truly know was equally evocative and emotional,” she says. “I know it sounds cliché and stupid, but it was it was moving to both of us on levels that wouldn’t have existed before the coronavirus. I feel grateful to be back to work.”