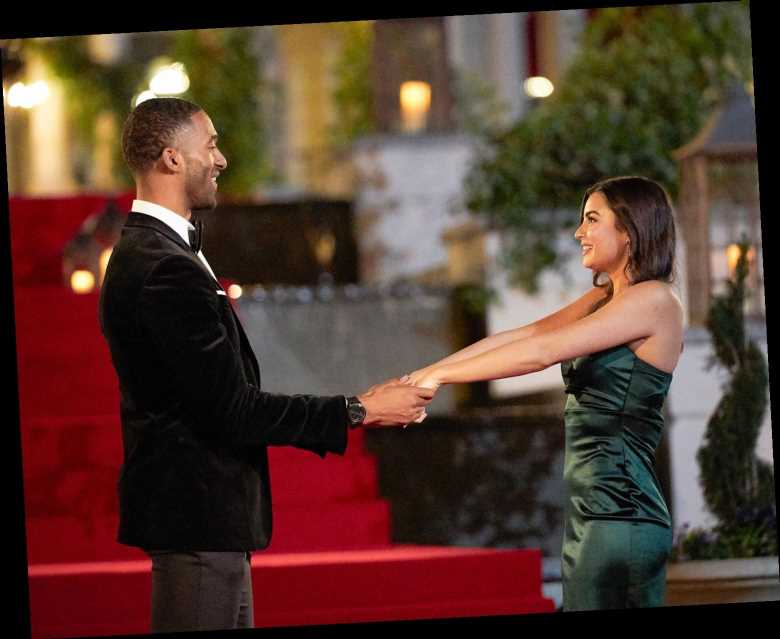 Rachael Kirkconnell flew to New York City with the hopes of giving her relationship with Matt James another shot — but it didn't work out.

The first Black Bachelor lead, 29, bought a ticket for Kirkconnell, 24, to "stay with him," a source close to the contestant tells PEOPLE of her visit this week.

The season 25 contestant believed she was going to see James to mend their relationship and was disappointed when that didn't pan out.

"Matt and Rachael have FaceTimed every day since March, besides one week in between the finale and After the Final Rose when they were processing the photos scandal," the source reveals.

The source made the revelation as a woman claiming to be James' ex said that he had spoken with her just days before inviting Kirkconnell to stay with him in New York.

Though James and Kirkconnell left season 25 of The Bachelor as a couple and remained together for a period of time after the cameras stopped rolling, their romantic relationship came to an end after photos of Kirkconnell attending an antebellum plantation-themed party in 2018 resurfaced on social media. She has since apologized and said that she is "learning and will continue to learn how to be antiracist."

Since their breakup, James claimed that he wasn't actively pursuing the idea of reconciling with her, but didn't feel Kirkconnell was "irredeemable."

However, the source tells PEOPLE, "He's been telling her he loves her and has never felt this way for anyone else before. After the scandal, he said it would take time for them to work on themselves separately, but he wanted to get back together one day and still pictured a life for them together, with a family and everything."

Kirkconnell, the insider says, "understood why he publicly said he couldn't see a future with her because of what she had done and the responsibility he felt as the first Black Bachelor, and she supported him. " When James invited the Atlanta native up to New York, she said yes because the former Bachelor agreed that "they would work on their relationship and be consistent about things — out of the public eye, until they figured everything out."

Upon coming up to be with him, Kirkconnell was "shocked" that he invited her out to dinner and that he "didn't seem worried about being photographed," the source tells PEOPLE.

Pictures of the pair walking together quickly surfaced, but a source close to James told PEOPLE earlier this week the pair are "are just friends."

"They are not together. He supports her as a friend. He is not looking for a relationship," the insider said Wednesday. "Matt is focused on engaging in meaningful projects in the community at this time." The insider close to Kirkconnell says she was "extremely upset" when she saw headlines about their relationship being platonic.

"He insisted that he didn't know anything about those articles and had nothing to do with them," the source tells PEOPLE.

The insider adds that Kirkconnell "heard he'd been talking to a woman named Grace two days before flying her out to N.Y.C."

"It was the final straw," says the source.

On Friday, a woman named Grace Amerling spoke out in an interview with blogger Reality Steve.

Amerling, a professional horse rider, told Steve Carbone she met James in Florida and spent time "briefly" with him and Tyler Cameron there when the pair quarantined together.

The Bachelor lead tried to recruit her to go on the ABC show once he found out he was cast, but she declined and their romance ended, Amerling claims.

However, two days before Kirkconnell came to visit James in New York, Amerling said James texted her "out of the blue" and asked her to come to Miami "for the night," but she declined because she was tired.

"It just didn't sit right with me," the equestrian said. "I just felt like Rachael was so in love with him and for him to be trying to contact me and hang out with me – someone he's had past romantic relationships with – two days prior in Miami… I felt like I had to say something for Rachael's sake."

She added, "Rachael is the real victim here." "Rachael loves Matt, but she feels like she was ignoring red flags," the source tells PEOPLE. "She knows he does love her. She knows he's not a bad guy, but he's not in a place to be in a relationship."

Kirkconnell was ready to be "all in," but feels that James had "broken her trust," the insider says, adding "she doesn't know if she'll ever be able to trust him again."

The former Bachelor contestant went on to hang out with some of her castmates after her confrontation with James.

After her girls' get-together Kirkconnell went home, "and she still hasn't heard from [Matt]."

James told Simmons he found out about Kirkconnell's resurfaced photos "just like everybody else did" — through social media — and that it was "heartbreaking" to find out they were real.

"The tough thing is having to explain to America why those pictures are problematic to me," he said. "You hear people harping on forgiveness and I forgave her when she told me. That doesn't mean I'm not disappointed and that I don't want her to do better."

Will you accept this rose? Sign up for PEOPLE's free weekly Bachelor Nation newsletter to get the latest news on The Bachelor, The Bachelorette and everything in between.

As James continues to heal from their split, the real estate broker is taking a break from dating and "engaging in meaningful projects in the community at this time," a source previously told PEOPLE.