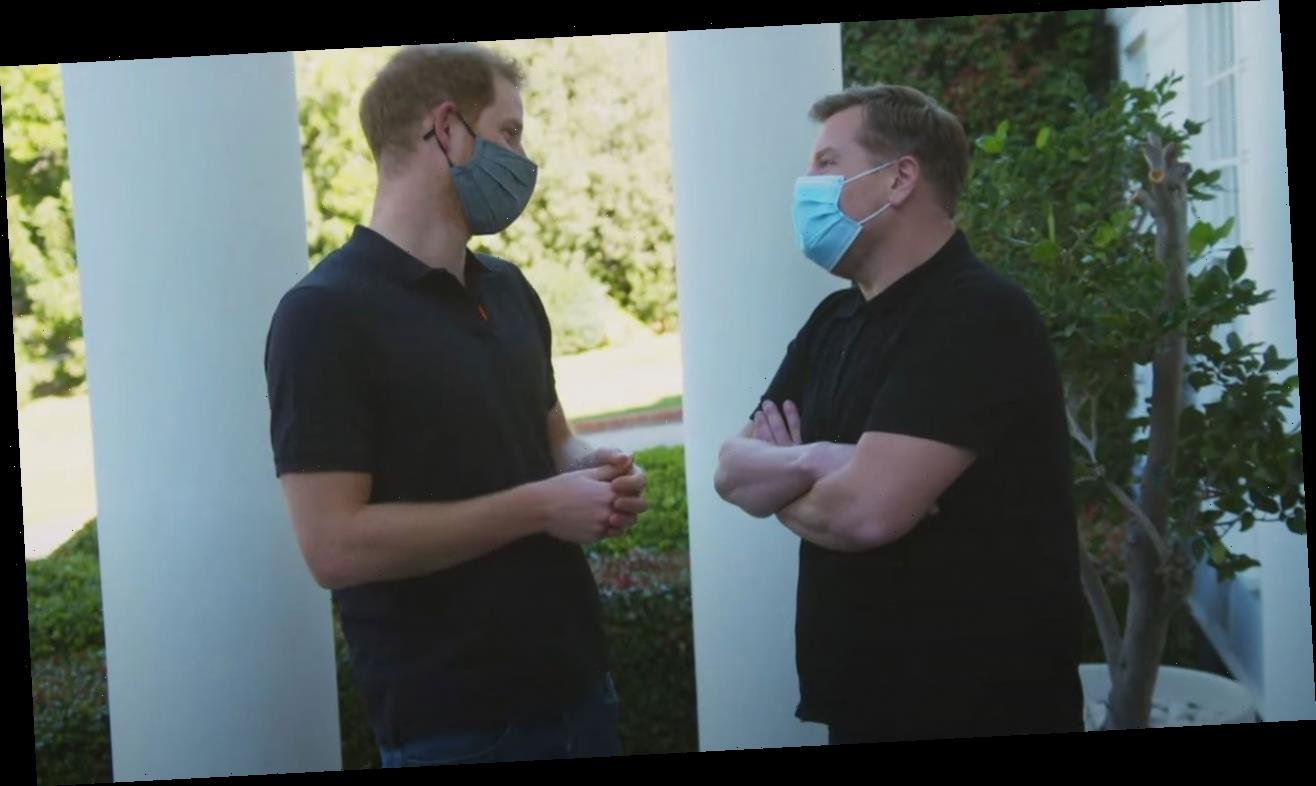 Prince Harry got his first real tour of Los Angeles from James Corden. The 36-year-old Duke of Sussex made a surprise appearance on Thursday’s episode of The Late Late Show in a pre-taped segment that saw the two Brits drive all across the City of Angels.

Unlike James’s “Carpool Karaoke” segment, the talk show host ditched the white SUV and opted for the slightly less subtle double-decker tour bus. He picked Harry up, and the two rode on top, in the open air, sipping English tea and chatting about all the celebrity homes they passed by in the Hollywood Hills.

The first major stop came when James brought Harry to a house he felt would be a perfect fit for the royal now that he lives near Los Angeles — the house from The Fresh Prince of Bel-Air.

The stars walked up to the mansion as Harry rapped some lines from the sitcom’s iconic theme song off the top of his head. The two surprised the overwhelmed and excited homeowner, and James asked on Harry’s behalf how much it would cost for the prince to purchase the property.

After Harry excused himself to use the restroom in the famous mansion, James borrowed Harry’s phone and FaceTimed with his wife, Meghan Markle, to ask about the possibility of buying the home. It was revealed that she calls her husband “Hars” and that she’s had enough moving around. The Duchess of Sussex’s cameo was brief, but her sweet chemistry with Harry was instantly clear and totally adorable.

After leaving the mansion, James and Harry got into some personal talk, and the Late Late Show host asked when in their courtship did Harry know that things were likely going to get serious with Meghan.

“The second date I was starting to think, ‘Wow, this is pretty special.’ It was just the way we hit it off with each other, and we were just so comfortable in each other’s company,” he recalled.

Harry explained that dating, when it comes to members of the royal family, is “kind of flipped upside down.”

“All the dates become dinners, or watching TV or chatting at home. And eventually, once you become a couple, then you venture out to dinners, to the cinema and everything else,” Harry explained. “So everything was done back-to-front with us.”

“So we got to spend an enormous amount of time just the two of us,” he continued. “Rather than going to friends’ houses or out to a dinner where there were other distractions. There were no distractions, and that was great. It was an amazing thing. We went from zero to 60 in the first two months.”

Their highly publicized courtship led to the lavish royal wedding, and eventually to the pair welcoming their baby boy, Archie, in May 2019.

“My son is now just over a year and a half and he is hysterical. He’s got the most amazing personality,” Harry said. “He’s already putting three, four words together, he’s singing songs.”

Harry also revealed what one of Archie’s first words was “crocodile.”

The duke also got candid about his and Meghan’s decision to step away from their royal life, explaining that it was “a really difficult environment” for them because of the tabloid scrutiny.

“We all know what the British press can be like, and it was destroying my mental health. I was like, ‘This is toxic,'” Harry noted. “So I did what any husband and any father would do… but we never walked away, and as far as I’m concerned, whatever decisions are made on that side, I will never walk away. I will always be contributing. But my life is public service.”

It appears that the lengthy L.A. tour was taped before Harry and Meghan had announced the news that they were expecting their second child, as the topic wasn’t brought up during the chat.

Harry, 36, and Meghan, 39, will, however, be sitting down with Oprah Winfrey in a 90-minute special next month. Oprah With Meghan and Harry: A CBS Primetime Special airs March 7 at 8 p.m. ET on CBS.