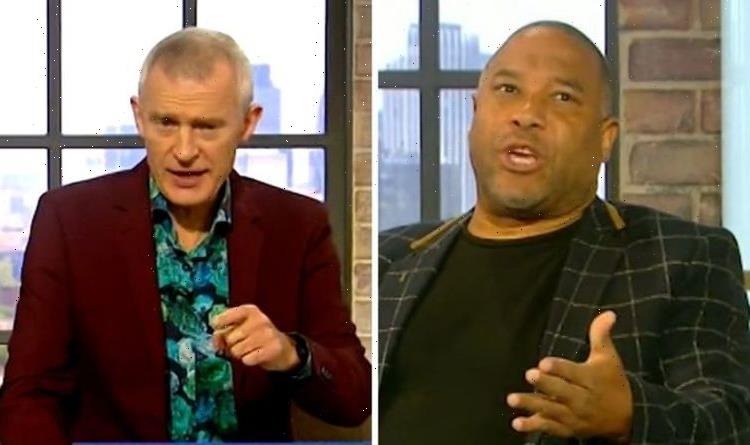 Former England footballer John Barnes ended up being savaged by a furious caller about Premier League footballers’ low uptake of the coronavirus vaccine during Thursday’s instalment of Jeremy Vine. The caller, named Ian, warned the football legend that players need to get themselves jabbed or they “could pass the virus on to anybody”.

Jeremy Vine described the 30 per cent uptake of Premier League players getting the coronavirus vaccine as “shocking” during the Channel 5 show.

Caller Ian phoned in to have his say on whether England player Marcus Rashford should use his platform to encourage more footballers to get vaccinated.

However, the caller unleashed his fury on John, which took the former footballer by surprise.

Ian told Jeremy: “I think it’s disgusting and I think Marcus Rashford should spend more time trying to persuade his colleagues to get vaccinated rather than get involved in Government policy about benefits and what have you.

“He did a good job with the foodbanks, I agree to that, but it’s about time that the primadonnas who are footballers, started listening to the public and get themselves vaccinated.”

Ian then lashed out at John for telling viewers Premier League footballers have not been mixing with the public.

He fumed: “And for John Barnes to say they are not mixing with the public – what about the training staff and the admin staff in the ground who work there 24 hours a day?

John reflected on the caller’s comments and bluntly replied: “Well, make it compulsory for them to do it.

Jeremy chimed in: “Ian, if they made it compulsory, you’d have to say such and such a player won’t be able to play as they’ve refused the vaccine.”

Jeremy asked Ian if he would be OK with non-vaccinated footballers not being able to take part in matches.

The caller replied: “Yes, I’d be OK with that because I am not a football fan, to be honest.

“But I think they should, yes. I think it should be a condition that if they go into the [football] grounds, the same as spectators, they should be vaccinated.”

He also said the training and management staff should be vaccinated against coronavirus, too.

“They should all be vaccinated because they are going to come out and mix with the general public,” Ian added.

The debate made viewers take to Twitter to air their views against mandatory vaccines, with user Boris saying: “Footballers are young fit and healthy and have nothing to gain from the vaccine, it won’t stop them being tested positive at any less rate, it’s not like many are missing games anyway.”

Lee Drake added: “It’s a choice and they like anyone else cannot be made to take the vaccine. I’m sure if it was law or a rule that you had to have had it before playing then I think most of them would be double jabbed.”

Richard commented: “Making vaccines compulsory is a no go. Never get it through Parliament and only encourage more not to get it.”

Jeremy Vine airs weekdays on Channel 5 at 9.15 am.