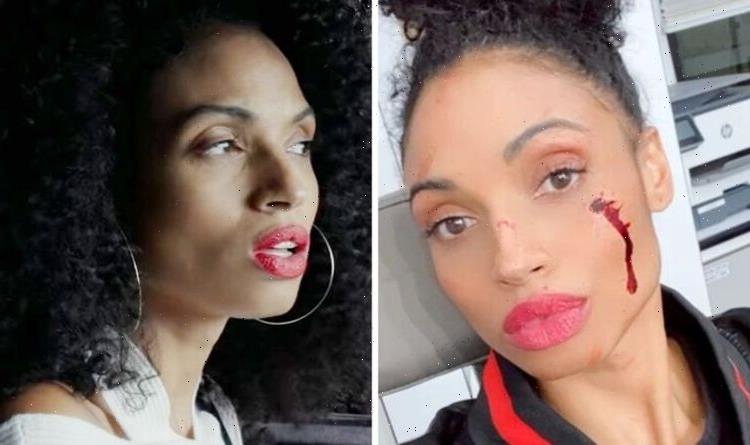 Gabrielle Ryan joined the Power universe as Gloria when she met series mainstay Tommy Egan (played by Joseph Sikora) in the first episode of Force. Sadly, her time in the popular Starz franchise came to an end in the latest episode when her death was indirectly caused by her boyfriend Vic Flynn (Shane Harper). Gabrielle has recently taken to Instagram with a behind-the-scenes look at the series’ latest devastating twist.

The Power star has posted a selfie of herself bloodied up for her final appearance as Gloria in the first season of Force.

Her character was unexpectedly killed when a mistake by Vic led them directly into a Serbian gunman’s line of sight.

Gabrielle has since taken to social media to reveal an exclusive look at the scene, as well as throwing some shots at her character’s stubborn boyfriend.

She wrote: “Y’all are the absolute sweetest. All the messages, tweets and DMs. Gabrielle is fine.”

For Gabrielle, getting killed in the popular Starz series simply meant some time in the makeup chair.

Unfortunately, Gloria suffered a much more horrific fate when the rapid gunfire left a bullet hole in her head during the frantic shootout.

“Gloria however, now has a bloody hole on her face,” the actress continued.

“Why didn’t Vic just listen to Tommy[?] He never steered him wrong before, like he said.”

In episode eight, He Ain’t Heavy, Vic and Gloria try to skip town for fear Serbian drug lord Rodovan Mirkovic (Konstantin Lavysh) would be coming after them.

Vic’s father Walter Flynn (Tommy Flanagan) had taken out three of Rodovan’s most trusted lieutenants, so it was only a matter of time before their rival retaliated.

Tommy tried to convince Vic to take an untraceable car so they wouldn’t be followed, but the Irish crime prince insisted on taking his own ride.

Sadly, this meant the Serbs were easily able to catch up with them, and his stubbornness came with a tragic cost.

Gloria’s post featured a closer look at the scene in question and included her and co-star Shane’s crash dummies for the dangerous stunt.

Both Shane and Joseph also took to the comments to say their heartfelt farewells to Power’s short-lived yet beloved cast member.

“The stunt dummy’s holding hands,” Shane laughed. He then continued: “We all love you Gabrielle… heartbroken… and we all loved Glo as well.

And Joseph replied: “You are a huge part of the family and ALWAYS will be.

“You’re just getting warmed up, it’s only up from here. Love you.”

Gloria’s time on the series may be over, but her acting career is clearly just getting started.

The English actress could always return for flashbacks in Force season two, but she’ll undoubtedly be back for another exciting new project in due course.

Power Book IV: Force season 1 continues Sundays on Starz in the USA and StarzPlay in the UK.