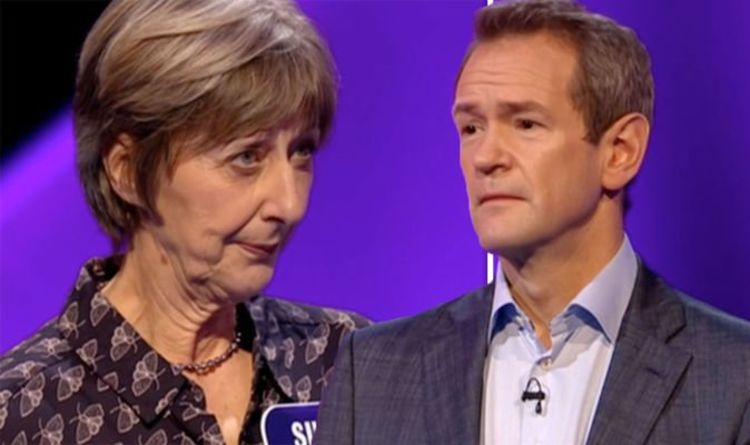 The BBC show was joined by returning London pair Sile and Glenn and Keith from Birmingham and Adam from Worcester in the second podium.

Friends Susan from Leeds and Sue from Wakefield took up the third podium, and finally business partners Frank and John from Liverpool made up the final spot on the latest Pointless episode.

Players normally hope for an easy first round to ease them in to the game, but today’s instalment saw quite the opposite.

Yet just as they did, Susan and Sue appeared to be getting incredibly excited over the topic.

They began giggling and whispering to each other, putting a halt to Alexander and Richard’s proceedings.

Unable to continue without addressing the situation first, Alexander suddenly declared: “We’ve never had a reaction like that before.

“I’ve never seen something like that from chemical elements!” he went on, as Sue and Susan struggled to maintain their composure.

Richard noted in agreement: “It’s interesting to get such an enormous reaction from a chemistry round.”

“Exactly… indeed,” Alexander continued, before going back to his duties on the quiz show. 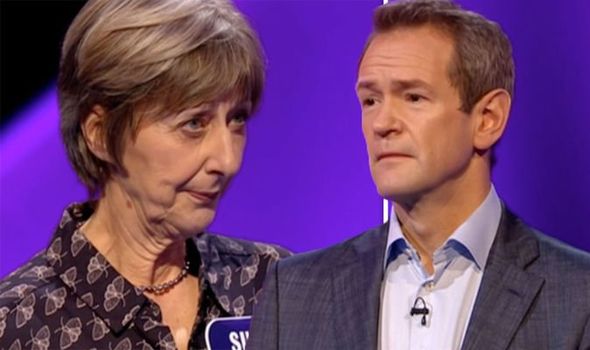 I’ve never seen something like that from chemical elements!

Yet despite their unusual reaction, Susan later admitted the pair weren’t confident on the topic.

“Again not a strong round,” Susan said. “But I think I’ll go ‘Iridium’,” to which Richard joked the element comes from the Latin for “rainbow” and it was discovered by “Sir Alfred Rainbow”.

“Lovely,” Alexander teased with a roll of his eyes.

Chatting about how they knew each other, Susan revealed she and Sue “write books together”.

“Does one of you pace and one of you write?” Alexander asked, and Susan laughed she “does a lot of pacing”.

“No we write together, but we tend to take one character each,” Susan clarified.

Sue went on to shed some light on her previous career in journalism.

“And in newspaper journalism are you assigned a particular thing or sent out to cover anything and everything?” Alexander asked.

“Depends how experienced you are, I mean when you first start out you’re a general reporter and then you begin to specialise. So then I became a deputy editor and I was kind of telling everyone else what to do,” Sue added.

The pair gave valiant efforts throughout the game, but in the end it was Frank and John who won the £3,000 jackpot prize.

Recently the show was cancelled on BBC One and it was replaced by a completely different programme, but it was for a very unexpected reason.

Got a shiny face? Using a facial oil can stop your skin looking so greasy, say experts