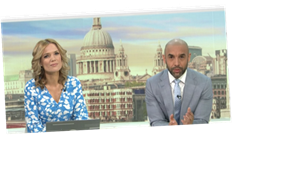 Alex, 40, and Charlotte, 45, caused quite the online storm as the pair took to the hosting chairs on the ITV show.

Ahead of the Easter weekend, the new unlikely duo took centre stage to bring viewers the latest news and current affairs.

Along with the front team switch up, Richard Gaisford joined the pair in the studio while Des Coleman presenting the weather forecast from Derbyshire.

In spite of their jolly efforts, GMB fans made it quite clear on social media that thet are still missing Piers Morgan after stormed off set last month.

Outraged viewers and loyal fans of former anchorman Piers took to Twitter declaring that they were "switching over" to BBC as a result.

One tweet read: "Switched on, and switched straight off, this show not for me now. Naga all the way BBC breakfast #GMB."

Another penned: "'#GMB is finished without Piers. Awful…"

A third fumed: "#gmb very easy decision to change over this morning!"

While a third wrote: "@GMB is so boring now without @piersmorgan no tough questions. No fact checking no fun banter. I'm done #PiersMorgan #GMB." Piers and Alex divided GMB fans after the pair went head-to-head live on air which later saw the Life Stories star stomp off and later handed in his notice.

The pair had clashed over the bombshell Meghan Markle and Oprah Winfrey interview, with Piers saying he "didn't believe" the former Suits actress.