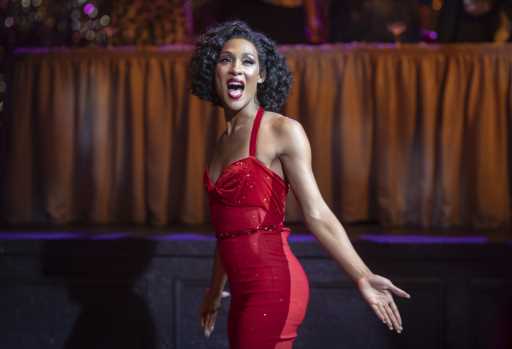 THE PERFORMANCE | Pose‘s greatest gift has been introducing us to an incredibly talented crop of LGBTQ performers who’d never been given the proper spotlight before. Case in point: Rodriguez had had a few bit parts on TV before Pose, but her work as house mother Blanca has been a revelation, and she was stunning in this week’s Season 2 finale, as Blanca looked death square in the eye before discovering a new lease on life.

Blanca’s week got off to a rough start: She was rushed to the hospital thanks to a nasty infection, and the quiet resignation on Rodriguez’s face was heart-wrenching as Blanca made peace with her mortality. But her ballroom family rallied together to support her, and when Damon urged a recovering Blanca to get back to being a house mother, a fresh wave of determination washed across Rodriguez that was inspiring to see. And speaking of inspiring: Rodriguez positively sizzled when an ailing Blanca made her triumphant return to the ballroom, tearing off her dowdy clothes to reveal a tight red dress and jumping out of her wheelchair to lip-sync to Whitney Houston’s soaring rendition of “The Star-Spangled Banner.” (We won’t lie; we got chills.)

By episode’s end, Blanca was welcoming a pair of new kids into House Evangelista, and Rodriguez was reasserting her place as Pose‘s ever-beating heart: vulnerable, yes, but a lot tougher than she appears, too. If the category is “performances you want to stand up and applaud,” Rodriguez just scored 10s across the board.

HONORABLE MENTION | As FX’s Baskets wrapped its four-season run, its heart came pouring out like cloons emerging from a VW. Bringing it all home, Zach Galifianakis and Louie Anderson shared their warmest scene to date, an emotionally rich two-hander in which Mrs. Baskets reached out to son Chip, whose odd, possibly cult-curated behavior prompted Martha, Penelope and Dale to orchestrate his abduction from Tammy’s commune. Christine worried that Chip had lost himself in trying to find himself, while Chip explained that he was finally becoming his own man after for so long being a mama’s boy. As mother and son arrived at a peace about their respective futures (Christine is about to move far away from both her boys), Anderson did that thing he for years has done, disappearing into the role of a semi-nurturing matriarch, while Galifianakis capped his own run with some of Chip’s most emotionally complex scenes ever.

HONORABLE MENTION | To know Kelly Reilly‘s work as Yellowstone’s ball-busting Beth is to be borderline obsessed with it. And if you think we’re exaggerating, you owe it to yourself to check out the one-two punch that the actress delivered in “Enemies by Monday.” First, she thrilled as Beth leapt into action to avenge sister-in-law Monica’s humiliation by a racist shop owner. In one fell swoop, Beth trashed both the store and the bigot without Reilly ever raising her voice above a world-weary sigh — a feat that on its own would’ve handily earned her this distinction. But then, she damn near reduced us to tears as Beth showed Monica her sensitive side. By the time Reilly was through, we didn’t want to applaud so much as worship her.

HONORABLE MENTION | Lou Grant would have been vexed by Martha Kane, as brought to life on Epix’s Pennyworth by Emma Paetz. She who will someday birth the Batman has spunk to spare as an agent for the No-Name League, skulking around and waylaying nefarious types alongside the titular Alfred. But in addition to brandishing great grit and magnificent moxie, Paetz portrays Martha as someone whose wheels are always churning, operating in her capacity as an agent for change in in 1960s London. Martha’s not infallible — she probably should have sussed out that the countryside doctor tending to her gashed leg was up to no good with that syringe — but she’s perfectly imperfect, a quality that Alfred if only for an indulgent moment found irresistible. (Don’t tell Thomas!)