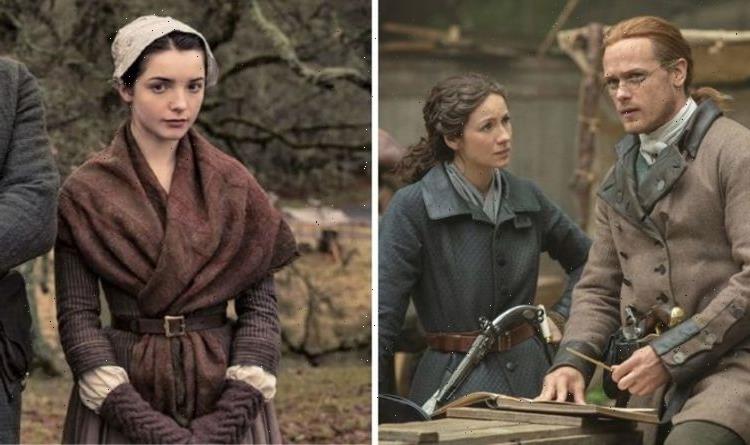 Outlander’s sixth season is still several months away, with a tentative release date of earl 2022, but that hasn’t stopped the rumour mill from turning. Speculation is at an all-time high, with fans pouring through Diana Gabaldon’s sixth book for clues. It is likely one of the major storylines from book six will be making its way to the sixth season of the Starz series.

Warning: This story contains spoilers for Outlander book six, A Breath of Snow and Ashes.

Will Allan Christie be the father of Malva’s baby?

The sixth season of Outlander is edging closer every day and it looks set to be one of the darkest seasons yet.

With the American Revolutionary War dawning and Fraser’s Ridge unable to escape its effects, there will be dramatic changes ahead for Claire (played by Caitriona Balfe) and Jamie Fraser (Sam Heughan).

But one of the most significant storylines of the season could be focusing on Malva Christie (Jessica Reynolds) and her pregnancy.

Each season has taken inspiration from its corresponding novel, with season one being based on Gabaldon’s original Outlander novel, and so on.

During the events of the sixth book, A Breath of Snow and Ashes, Malva, brother Allan Christie (Alexander Vlahos) and father Thomas Christie (Mark Lewis Jones) all venture to Fraser’s Ridge.

Initially, Malva is enjoying life in the settlement, working as an apprentice for Claire in her workshop.

The two soon form something of a mother, daughter relationship, leading to Malva sharing some potentially disturbing information.

She tells Claire that she is pregnant and that Jamie is the father.

Soon after, Malva is murdered with the town putting the blame on Claire.

Thomas takes the blame, though his motives are unclear as there is no motive for him to murder his only daughter.

However, everything becomes clear when it is revealed that Allan was the father of Malva’s child, one of the most shocking and twisted turns in the books.

Starz has not revealed how closely it will stay to the original source material, though the show has stayed very true in the past.

If the events of the book are transplanted to the screen, fans will be in for a shock during season six.

Back in June, star Reynolds shared a snap on Instagram, showing her suited and booted as Malva during the filming of the sixth season.

The star captioned the post: “And we’re wrapped!!! I’ll miss you my Malva, your wee troubled soul.”

The post implied Malva will not be back for season seven, which is already in early production.

This could mean the show will be staying true to the books once again, making the Malva and Allan storyline all but confirmed for season six.

Reynold’s fans replied to the post, with more than a few alluding to the events seen in A Breath of Snow and Ashes.

Eriruby wrote: “Heartbreaking story, I know it will be well told!!!”

Outlander season six will premiere in early 2022 on Stars in the USA. A UK release date is yet to be confirmed.