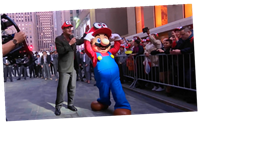 EXCLUSIVE: Crackle has set March 1 as the world premiere date for five-part documentary series Playing with Power: The Nintendo Story.

The show is written and directed by Jeremy Snead and executive produced (and narrated) by Sean Astin. World rights were acquired by Screen Media Ventures, the exclusive supplier of original programming to free, ad-supported Crackle. Both entities are owned by Chicken Soup for the Soul Entertainment. Sony, Crackle’s longtime owner, swapped its equity in Crackle for a minority stake in CSSE at the end of 2020.

Snead has explored the world of gaming in previous projects like feature documentary Video Games: The Movie and docuseries Unlocked: The World of Games, Revealed. Astin, known for acting roles in The Lord of The Rings, Rudy and The Goonies, connected with Snead via a mutual admiration for videogame history, culture and lore. They have had a nine-year producing partnership focused on gaming content.

“Producing and directing Playing with Power has been a lifelong ambition of mine as an artist, gamer and filmmaker,” Snead said. “To see my show not only come to life with such loving care through my team and I’s efforts but to also have the opportunity to partner with such a talented and experienced team like Screen Media and Crackle to release the series to the public has just been a dream come true.”

Astin said tackling the century-plus of Nintendo history was “an ambitious goal,” but “little by little, over four years, the series really came together. I think we’ve created a five-episode journey that will open up the world of video games and this legendary company in a way that most people have never seen.”

Philippe Guelton, president of Crackle Plus, called the series “the perfect blend of fun and fascinating history that our audience really responds to.”

All episodes of Playing with Power will be available on March 1.

The acquisition deal was negotiated by Snead and Seth Needle, SVP of Global Acquisitions and Co-Productions, and Brendan Murray, Manager of Digital Acquisitions, on behalf of Screen Media.