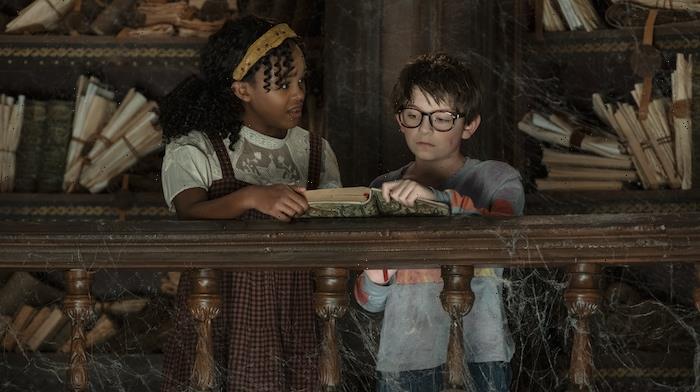 It’s almost Halloween season once again, and Netflix is giving us a new feature film, Nightbooks, where a couple of kids have a run-in with a witch, a disappearing hairless cat, and a very spooky, very magical apartment building.

If the trailer is any indication, this looks like a very spooky and fun family movie. The story revolves around a boy named Alex (Winslow Fegley) who gets trapped by an evil witch (Krysten Ritter) in her magical apartment. In order to stay alive, he has to tell the witch a scary story every night. If he ever wants to escape, he must team up with another prisoner, Yasmin (Lidya Jewett), to find a way out.

Alex (Winslow Fegley) is a creative boy with a strong passion for writing scary stories. But when he’s labeled weird and rejected for what he likes, he swears he’ll never write again. That’s when an evil witch (Krysten Ritter), captures him in her magical apartment in New York City and demands that he tell her a new tale every night if he wants to stay alive. Trapped inside with Lenore, the witch’s spiteful cat watching his every move, Alex meets Yasmin (Lidya Jewett), another young prisoner who has learned how to survive the witch’s wicked whims. With Yasmin’s help, Alex must learn to embrace what makes him unique – his love for scary stories – and rewrite his own destiny to break them free.

Netflix has also released a poster highlighting Jessica Jones’ Ritter as a wickedly splendid witch. Nightbooks is based on the book by J. A. White and adapted for the screen by Mikki Daughtry and Tobias Iaconis. It’s directed by David Yarovesky (Brightburn) and produced by Sam Raimi, Romel Adam, Mason Novick, and Michelle Knudsen.

I haven’t read the original book, but based on what we know so far about the film, I’m pretty sure I’ll be checking it out. Ritter as a witch? A spooky building full of decapitated baby dolls and skull-faced bugs? A room with a spiraling staircase full of books? This movie checks off a whole bunch of things in my wheelhouse, and I can’t wait to heat up some mulled cider and snuggle up on the couch while I watch.

Nightbooks will drop on Netflix on September 15, 2021.