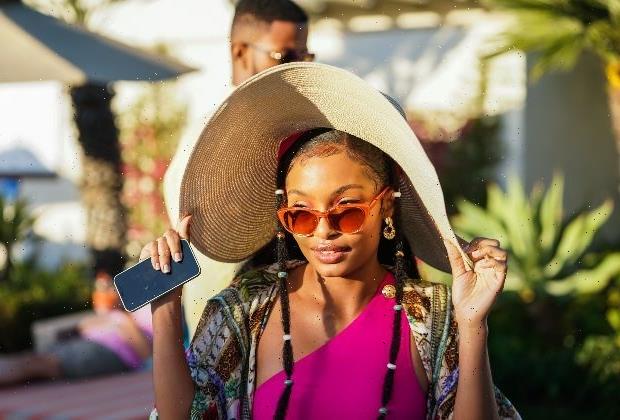 Most, if not all, of grown-ish fans’ questions will be answered when the beloved Freeform collegiate comedy bounces back for Season 4 on Thursday, July 8 at 8/7c.

The basic cabler dropped a new trailer for the black-ish spinoff on Monday and enticed us with more than a few possible plot twists. For starters, after finally connecting and declaring their love for one another in the Season 3 finale, Zoey and Aaron are not only a couple, but vacationing with their friends in Mexico. It’s a vacation that also leads to the two getting frisky in the sand and thrown in the pokey as a result. Is that why Zoey’s dad Dre is upset?

The nearly two-minute montage of exciting highlights also hinted at relationship woes for Anna and Javi; added stress for Nomi as a single mom trying to graduate from college; a wedding (!); and at least one confrontational and frightening Black Lives Matter protest on campus with Doug saying he sees himself in Ahmaud Arbery and others whose only crime was being a Black man.

As for Vivek, he’s dealing with some legal issues of his own, presumably for drug possession after the cops pulled him over in the Season 3 closer. Conspicuously missing from the trailer were both Vivek’s girlfriend Heidi and Aaron’s ex-boo Rochelle, whom Zoey unceremoniously replaced.

Are you excited about grown-ish Season 4, and why do you think Dre is really angry? Drop your thoughts in a comment below.