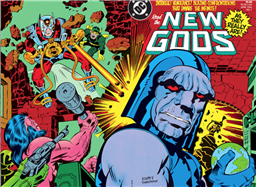 Darkseid, the most cosmic character in the eight-decade publishing history of DC Comics, is finally coming to the big screen in the upcoming live-action Warner Bros. film The New Gods, according to tweets by the project’s director, Ava DuVernay (Selma, A Wrinkle in Time).

That’s big news for comics fans who known Darkseid as the DC Universe equivalent to Darth Vader and The Emperor from Star Wars both rolled up into one towering tyrant. Darkseid is often cited as a direct influence on the creation of Darth Vader, the iconic screen villain introduced by George Lucas six years after Darkseid debuted in classic New Gods stories by comics titan Jack Kirby, who had already co-created the Avengers, the X-Men, and the Fantastic Four at that point.

There’s even stronger links between Darkseid and the Marvel Comics villain called Thanos — and that could pose a cosmic-level challenge for DuVernay and Tom King, the DC Comics star writer who won another Eisner Award at this month’s Comic-Con International and began working on the New Gods script with DuVernay the next day.

King and DuVernay face the “Thanos Problem”: Simply put, to the uninitiated audience the traits shared by Darkseid and Thanos are so substantial that it borders on the ridiculous.

Both are giant blue/purple aliens who look like they could be chiseled from stone. They each have children who have sworn to kill them. One has the Omega Beam, the other wields the Infinity Gauntlet. One seeks the Anti-life Equation, the other courts death. They each rule over a martial-minded planet and control vast armies of weird alien shock troops. They share a dream of snuffing out most/all life and each is vexed by earth’s superhero citizenry.

The biggest difference between the two characters who were created just four years apart? That’s easy, Thanos   is a monster movie success. Josh Brolin has played Thanos in four films since 2014, including this year’s Avengers: Endgame, which is merely the highest-grossing film in Hollywood history.

Moviegoers don’t know that Thanos was created by the very talented Jim Starlin for Marvel Comics and introduced three years AFTER his DC doppelgänger. That footnote has historical heft in the comics world but it won’t help the filmmakers of The New Gods who are faced with a grim choice: giving Darkseid a risky make-over that could alienate core DC and Kirby fans, or staying faithful to Kirby’s original vision and risking the jeers of moviegoer who will call it a cosmic rehash.

The “Thanos issue” may be part of the reason that Darkseid was left on the bench when Warner Bros brought Justice League to the screen in 2017 to unite against the threat of Steppenwolf, Darkseid’s uncle and a peripheral henchmen created by Kirby. It was a shockingly anonymous choice considering the brand name has far more traction in classic rock than in modern comics.

It’s reminiscent in a way of the challenge that faced Fox with it’s misfires with The Fantastic Four films. The quartet (co-created by Kirby and Stan Lee) were proudly featured by Marvel Comics for decades in “the world’s greatest comics magazine” (as each moth’s cover proudly proclaimed) and viewed as the “first family” of comics. That mattered naught after The Incredibles beat them to the screen with a pitch-perfect take on the feuding-family-as-superhero-team dynamic (not to mention similar powers, similar uniform aesthetics, similar villains, etc.)

Darkseid was introduced in 1971 as the cruel galactic despot who lords over Apokolips, a nightmarish planet devoted to war, torture, conquest, and total dominance over living things.

Created by Marvel Comics legend Kirby when he famously defected to rival DC Comics, Darkseid was introduced as the signature character in The New Gods, a sprawling epic centered on a psychedelic pantheon of interstellar deities.

The Fourth World Saga, as Kirby’s magnum opus came to be known, is the rare superhero epic that feel influenced by Jesus Christ Superstar, the musical that began the Age of Aquarius a year before the New Gods took flight.

The celestial struggle of costumed deities is fought between the heroic New Gods (who are led by the Zeus-like Highfather and include Lightray, Big Barda, Black Racer, and Metron) and the invidious minions of Darkseid on blighted Apokolips (including the sadistic Desaad, Granny Goodness, Mantis, and Malice Vundabar).