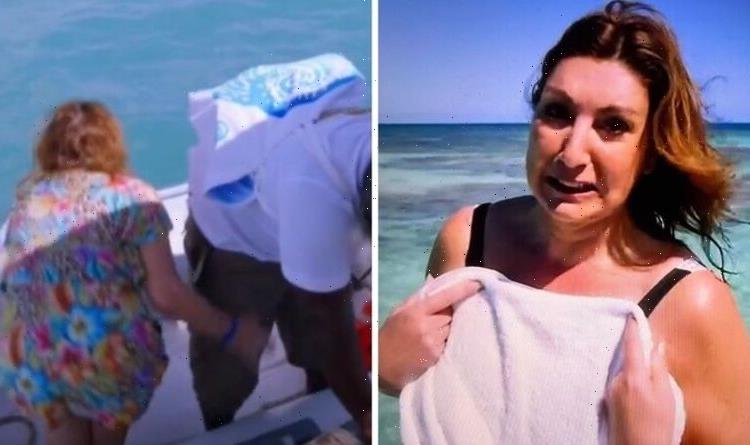 Jane McDonald has 'awkward' moment when getting onto a boat

For the final instalment in her four-part Channel 5 show, Holidaying with Jane McDonald: The Caribbean, entertainer Jane dropped the show’s anchor for the final time in Antigua. Having only briefly visited the island during her cruise ship days, Jane was excited to experience all the island had to offer and was surprised when she was invited to steer a fishing boat.

Taking the small one hour commute from Grenada, where Jane was in last week’s episode, she couldn’t wait to experience the island of Antigua and its 365 beaches.

Talking about the island, she referenced how it was the same size as “Wakefield” so she “should feel right at home” during her time.

She ended her trip by heading to Jolly Harbour, where she chartered a private boat and, along with skipper Daniel, she could “see how the other half lived” as it was a pricey excursion.

Much to her surprise, she had to drive the boat herself, and she proclaimed: “I’m just a bit worried as I don’t know how to stop it.”

She added: “I can’t believe I’m doing this. I thought I was just going to sunbathe and sing Duran Duran.”

She learned to fish on the trip and she chuckled as she was told to “wriggle her rod” and “tug” at it.

Getting off the yacht to the small tender to jet off to her own private island for the remainder of her cruise, the star blushed as she grabbed her skipper’s thigh.

Struggling to get onto the smaller vessel, she grabbed Daniel’s inner leg and said: “Woop, almost grabbed something else then!”

Earlier in the programme, she shared some hilarious moments with the locals and her friends.

Partnered with tour guide Randy, Jane was shocked at the giant tortoises and said: “They look like walking footstools.”

She later said: “It’s like the blue peter tortoise on steroids.”

Impressed with their eating habits, the TV personality wanted to know more about how they pair up and if they live as a family unit.

She asked: “Do they mate for life?”

The sanctuary worker replied: “No, these guys will mate and move on.”

Letting out a surprised “oh” she added: “Oh, I see. I’ve got friends like that myself.”

Having visited Stingray City just beforehand, Jane was able to swim with stingrays in the ocean and even got a high five from one.

Heading on her next adventure, she concluded: “I’ve fondled a fish, and I’ve toyed with a tortoise.”

Next, the star learnt to “grunt” like a tennis player with a private session and had a go at costume making ahead of the island’s carnival season.

Fan Tarina Jennings enjoyed the final chapter of the show and tweeted: “Legit think I want to be #JaneMcdonald when I grow up.”

@TToplis1 liked Jane’s comedy narration of her time on the Island and said: “Antigua’s the same size as Wakefield [laughing emoji] #JaneMcDonald #HolidayingWithJaneMcDonald.”

During Jane’s Caribbean adventure, she had previously visited Barbados, St Lucia and Grenada ahead of her journey to Antigua.

Holidaying with Jane McDonald: The Caribbean is available on My5.