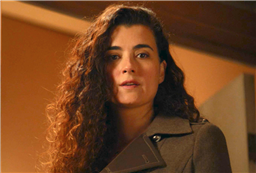 TVLine hits rewind on the TV season’s biggest “What Happens Next?” finales, then invites you to predict the cliffhanger outcomes.

Ziva David most unexpectedly resurfaced, and in the flesh, in NCIS‘ Season 16 finale. But will her only happy reunion be with Gibbs? Might baby daddy DiNozzo show up as well? Or is she, to the consternation of more than 90 percent of TVLine readers, just another figment of Boss’ imagination?

After Gibbs, in cracking a season-ending case, got wind of a grey-market opioids racket run out of Canada, he retreated to his basement, where (the dead) Diane Sterling assured her ex that when times get rough, “we are all inside you” to help. Moments after Diane disappeared up the stairs, Ziva appeared atop them, paused, and then made her way towards her onetime boss.

“Hello, Gibbs. No time for pleasantries — you’re in danger…,” she said. Noting his stunned (?) silence, she added, “Well, aren’t you gonna say something?”

“Ziva” (or “Zeever,” if you insist on being that person) was Gibbs’ only response before the season faded to back, his mouth letting slip a faint smile at the daughter figure seemingly back in his life.

But just how “back” is Ziva, considering that NCIS alum Cote de Pablo is only confirmed to appear in the Season 17 premiere (airing Sept. 24)? Has she “come back from the dead” only to see Gibbs, or will she reconnect with other former colleagues? And what about Tony?