One of the best new comedy series of the season is “Grand Crew.” This gem, the brainchild of Phil Augusta Jackson, follows the lives and loves of a group of Black millennials who converge at Grand Crew, a popular wine bar in Los Angeles. “There’s a bar down the street from where I live, where we all gather and talk about our lives and things of that nature. So that was the catalyst for the core concept for the show taking place at a wine bar,” Jackson shared.

For Jackson, “Grand Crew” was the perfect opportunity to explore some weighty themes Black men face in America, but balance that with joy and laughs. From therapy to relationship breakups to father/son issues, “Grand Crew” lends a sympathetic lens in showing the anxiety and vulnerability Black men can be afraid to show or explore within.

IndieWire spoke with Jackson via Zoom to discuss his vision for “Grand Crew,” why he finds therapy helpful, and what he learned from working with Issa Rae on the last two seasons of “Insecure.”

IndieWire: Since the premiere of “Grand Crew” what has been the reaction like from the fans on social media?

Phil Augusta Jackson: I think people are really digging the vibe of the show. I think it’s been a while since we’ve had a Black “hang-out” show and what makes me happy is that people seem to be noticing the themes we’re hitting. But the thing that really makes me happy paired with that is that people are saying that the show is funny. We have these themes but also we also have these jokes. I want people to laugh and when we were in the midst of this pandemic shooting the pilot, the goal was to make a feel-good show that could make people laugh. What really excites me is viewers finding the show funny and feeling like they’re a part of the Crew.

When you were developing the male characters, was there an intention to fill in certain gaps as far as the depiction of how Black men are portrayed onscreen?

Absolutely. The stories we presented in this first season were inspired by either real conversations that I’ve had or real experiences that my amazing writers’ room would present. We would gather around certain topics to say, “This is something we want to talk about.” But we never wanted it to be in a way where it felt like we were being too preachy — we wanted to make these conversations, to provide the humor and then when you watch it, you’ll think, “Wait, there’s actually a deeper theme here.”

So when it came to therapy for example, it’s not anything that was ever on my radar growing up, but I started doing therapy last year and it was incredible! So that became a story and something really important for us to present. With each episode, the goal was to at least have one topic that directly relates to the perceptions of what it is to be a Black man or a topic that is relevant to the Black community and find a way to present it with humor and levity. 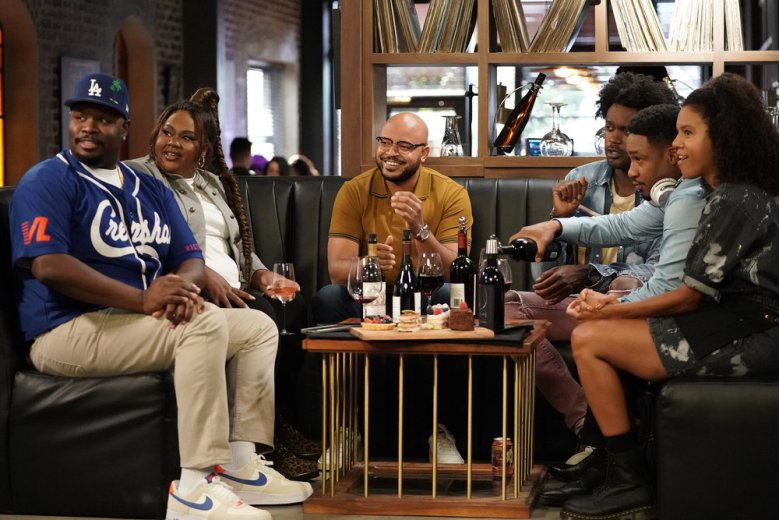 Unfortunately with certain shows and movies with a predominantly male cast, there can be a certain misogyny and disrespect shown towards women, so I was so pleasantly surprised that “Grand Crew” doesn’t have that energy at all.

I wanted healthy conversations, especially when it came to the topic of women and dating. When I think about the things that I talk about with my friends, a lot of times it’s unpacking insecurities like, “I don’t know where her head is at, but this thing happened.” There was an opportunity to pull from the experiences I’ve had in real life where it’s more about, “I’m really excited about this person” or “I’m not really exactly sure what to do about this situation,” as opposed to leaning into the misogynistic side of things. And also just for me as a creative that didn’t feel like the most interesting or right territory, especially given the core premise of the show that we established in the pilot.

One of my favorite episodes is “Wine and Headlines” which shows how each of the characters deal with an avalanche of bad news cycles.

There was a real opportunity to talk about those moments where the headlines are just so bad and how we carry that weight around, but considering that there is a spectrum of Black trauma to Black joy the goal was to show how do we pull ourselves out of that trauma? That became the fulcrum for how we developed the storylines for that episode. It was something I had pulled from my own life where three or four things going on at once and my friends and I were like, “What is going on?” The best thing we can do is move forward and keep living our lives to the fullest.

So that became the springboard to explore what Noah and Nicky would do as brother and sister to help each other out. We have a storyline where Sherm is on his phone trying to keep up to date on everything in the news and diving deeper into the rabbit hole of bad news. When it came to Anthony and Fay, we wanted to show that sometimes doing an activity and just getting outside is the best thing to do.

You were on the writing staff during “Insecure’s” last two seasons. What lessons did you learn from the show’s creator Issa Rae and showrunner Prentice Penny?

Working with Issa and Prentice was incredible. They ran a great writers’ room which was a very collaborative environment. They create a very safe space for people to be vulnerable and share their experiences. I think you see the fruits of that in the end product of the show. When I joined for Season 4 of “Insecure”, at first I felt like the new kid in school, but very quickly got comfortable and it was a blast to work on. I ended up really admiring them and tried to replicate how they ran the room.  I wanted to make sure that everyone knew that they could share whatever they’re feeling. To follow your instincts and trust what you find funny and interesting.