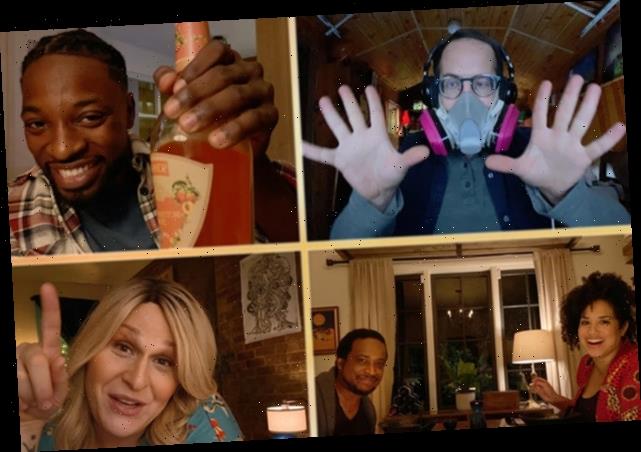 Now that you’ve successfully made it through another day of Zoom calls, it’s time to unwind… by watching other people’s Zoom calls.

In the spirit of our new, socially distanced lifestyles, NBC on Thursday debuted Connecting…, a comedy that follows a group of friends as they navigate life in quarantine during the coronavirus pandemic. Before you give us your thoughts on the series premiere, let’s recap who we met in Episode 1, which takes place on March 29, 2020 — or, as you’ll surely recall, the very beginning of a near-nationwide lockdown.

First, there’s Annie (StartUp’s Otmara Marrero) and Ben (comedian and onetime America’s Got Talent finalist Preacher Lawson). They’re longtime friends with obvious romantic chemistry, but Annie keeps missing her opportunity to ask Ben if he wants to move in with her, even when they’re the only two people on the group video chat. Also disheartening? Just as Annie gets thisclose to working up the courage, Ben is interrupted by a phone call from his ex-girlfriend… and she also wants to move back in with Ben and give things another try. More on that dilemma later, though.

Elsewhere on the group call, there’s Pradeep, a married father who, after spending more time at home, worries he doesn’t actually enjoy hanging out with his young kids; Ellis, who is most devastated by the NBA’s shortened season (go Clippers!); Rufus, who seems to be both a germaphobe and conspiracy theorist; and married couple Garret and Michelle, who are guiltily enjoying quarantine and all of the new recipes they’ve been trying while stuck inside.

As more people hop on the video call, they make mention of another friend named Jasmine, for whom they’re all growing very concerned — and when Jasmine finally joins the call, we learn she’s a doctor currently working at a New York City hospital. (Again, you’ll surely recall that the months of March and April were extremely dire for New York City.) As Jasmine details the awful, gut-wrenching decisions she’s forced to make at work every day, her friends grow somber, holding back tears as they let Jasmine vent. But then, just when it appears Jasmine is on the verge of a full breakdown, she lightens the mood a bit: “And also, it just hit me like a piano smashing down on me that… the Clippers are not coming back this year!” (That NBA hiatus took a toll on everyone, it seems.)

Now that she’s brought some levity to the call, Jasmine weighs in on Ben potentially moving back in with his ex, and she thinks it’s a dreadful idea. Then, in her sleep-deprived state, Jasmine blurts out, “Annie, tell Ben you love him already!” — which would be a disaster, if Ben’s Wi-Fi hadn’t miraculously gone out just moments before Jasmine blabbed Annie’s big secret. When Ben finally reconnects, he reveals the last thing he heard before his screen froze, and everyone (subtly) celebrates when they realize he didn’t hear about Annie’s feelings for him.

“Hey, guys, this is going to end, right?” a subdued Annie asks the group before the episode ends. “Like, we’ll do another month or so of quarantine and then we’ll go back to normal?”

OK, your turn. What did you think of Connecting’s premiere? Cast your votes in our polls below, then drop a comment with your full reviews!