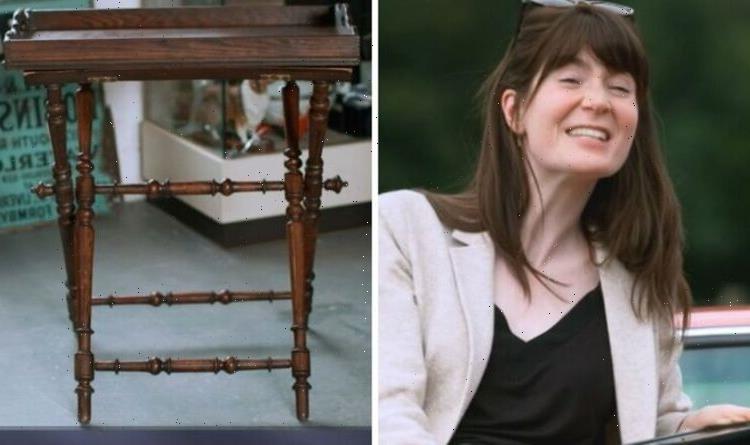 In a classic episode of Antiques Road Trip, experts Natasha Raskin Sharp and James Braxton went head to head as they travelled across the Devonshire countryside on the hunt for antiques. Both BBC presenters rummaged through local charity shops in a bid to find five items each, which they could then take to auction to sell. However, poor Natasha was left devastated when one of her beloved finds failed to make a profit when it went under the hammer.

“It’s so low,” the expert said in disbelief as the auctioneer asked for bids on the item.

“I generally thought that was an easy profit,” she told James as she admitted: “I am screaming on the inside.”

“I am trying to look cool here lying on the Porsche like I am fine,” she joked.

James was up next with his ass’s milk invoice which he purchased for £20.

“I don’t think you actually drink ass’s milk, you bathe in it,” he told Natasha before the item went under the hammer.

As the auction got underway, James shouted: “Come on, keep going.”

“It’s going to easily make a profit on this,” Natasha commented after a bidder on the phone placed an offer.

James ended up making a £10 profit after the invoice sold for £30 at auction.

Up next was Natasha’s sewing box which she ended up buying for £45.

Luckily for the expert, she managed to redeem herself after the item was sold for £60.

“I am really chuffed with that,” she told James after it made a £15 profit.

As the auction came to an end, Natasha faced another disappointment after her Victorian spoons failed to spark any interest from the buyers.

The expert was also left gutted when her cowbells made a £1 loss.

“Neither of us have really covered ourselves in glory?” Natasha said after the auction had ended.

While Natasha, who also began with £200, made a slightly smaller loss and came away with £164.

Antiques Road Trip is available to watch on BBC iPlayer.