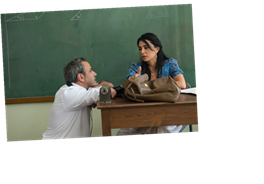 The feature debut by Oualid Mouaness, inspired by the director’s boyhood memories of the Israeli invasion of Lebanon in 1982, revisits a dark moment in Lebanese history through a different lens. At a private school on the outskirts of Beirut, as the conflict inches closer, 11-year-old Wissam (Mohamad Dalli) is trying to find the courage to tell his classmate he loves her. But for his teachers, Yesmine (Capernaum director Labaki) and Joseph (Rodrigue Sleiman), the jets in the sky signal a more ominous time.

Winner of the Toronto International Film Festival 2019 NETPAC Prize, the film is due to be released on VOD platforms from January 19, 2021.

Pic was produced by Tricycle Logic, Mad Dog Films and Abbout Productions, and co-produced by Norway’s Barentsfilm in association with Boo Pictures, Soapbox Films and Old Mill Ventures, with the support of the Doha Film Institute, Sørfond+ and the Image de la Francophonie fund.

“Oualid Mouaness’ 1982 manages to capture the beauty and innocence of childhood’s first blush of love amidst the backdrop of a traumatic war ripping apart the city of Beirut. It is a quietly impactful film that resounds long after viewing, and Utopia is thrilled to be bringing it to U.S. audiences,” said Danielle DiaGiacamo, Head of Content for Utopia.