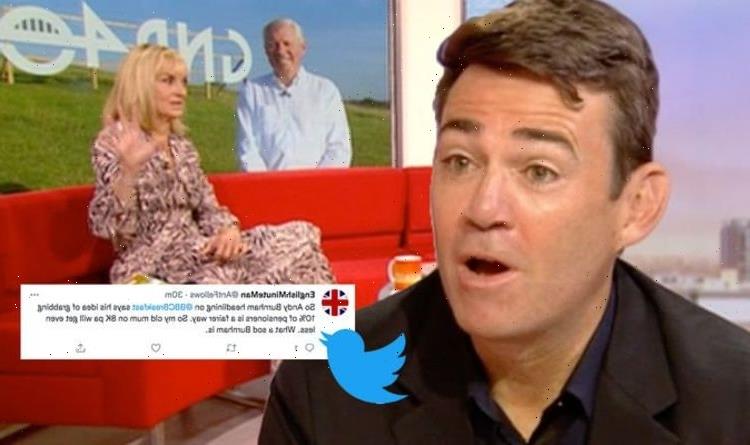 Manchester Mayor Andy Burnham told BBC Breakfast presenters Jon Kay and Louise Minchin pensioners need to cough up 10 percent of their assets or savings to the taxman to cover the cost of social care. He said the Prime Minister’s plan to increase national insurance contributions for people under 65 was not the way forward. Instead, he demanded Labour leader Keir Starmer to adopt a death tax plan, leaving many viewers appalled.

During Wednesday’s BBC Breakfast, Kay asked Mr Brunham: “Can we just talk about social care because it is something when you were in the Labour government, you tried to tackle, and it didn’t happen.

“There is now finally a plan, you might not agree with all the details of it, but you must welcome that at last something is being done?”

Mr Burnham replied: “Yes, because as always with this issue a nettle has to be grasped. It’s not going to be easy so let’s just say that.

“However, I don’t personally think this is the right plan to ask younger people saddled with student debt or low-paid people to pay care bills.”

The 51-year-old mayor added: “I know it’s difficult, but I honestly don’t think that is the way to do it. Social care staff who don’t even earn the living wage are now being asked to pay more for care costs.”

He went on to explain his view has “never changed” since he was the Health Secretary in 2009, and he stands by the idea of providing social care on NHS terms through a national care service.

“And to do that, [it would] require all older people to make a contribution, 10 percent of their savings or assets, and that means we can abolish care charges,” he stated.

“Then they can plan for the 90 percent of what they want to leave behind.”

Mr Burham went on to tell the show’s hosts “millions and millions of older people have been left in a terrible position” by the “broken system”.

“And if you just put a cap on a broken system it doesn’t fix it and that’s what I think Boris Johnson did yesterday,” he added.

“My own party has not done enough in the past on this issue, in fact, all politicians have shown cowardice on this issue of social care, but at least a plan is on the table.”

Looking ahead, Mr Burnham said he wants to “get the solution right” and get Labour to “put a better plan on the table”.

However, angered viewers took aim at Mr Butler on Twitter for his “unfair” comments on social care.

One furious viewer posted on Twitter: “So Andy Burnham headlining on @BBCBreakfast says his idea of grabbing 10 percent of pensioners is a fairer way.

“So my old mum on 8K pa will get even less. What a sod Burnham is.”

Another added: “@BBCBreakfast Burnham only seems to have ideas when he knows he won’t be tasked with delivering!! Bulls**t as usual.”

A third continued: “No. We need to bring back the concept of the deserving poor. It is grossly unfair to tax the assets of the many, paid for out of taxed income to hand the cash to someone who despite being fit and able has done nothing to secure their retirement and care.”

However, some viewers loved Burnham’s interview with one tweeting: “If only Andy Burnham was Labour leader. The UK might be in a much better place #BBCBreakfast.”

Someone else shared: “Just watching BBC breakfast and I am sure if Andy Burnham was the Labour Leader the next election would be winnable for the Labour Party. He seems to understand the people of this country.”

BBC Breakfast airs weekdays on BBC One between 6am and 9am