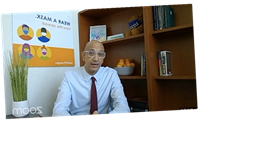 On Friday, California’s top health official was sent out by his boss to face the music.

Dr. Mark Ghaly, director of the state’s Health and Human Services Department, admitted that multiple on the state’s part had caused a backlog of 250,000-300,000 records in its data reporting systems. That system is used primarily to parse and distribute coronavirus data.

Ghaly said a July 25 server outage created a delay in lab records reaching the state system. At that time, a workaround was created to allow records to flow in more quickly. That workaround was supposed to be temporary but someone somewhere never switched the system back. That mistake caused further data delays and created a backlog. Ghaly said the workaround had since been reversed.

On top of that, the state failed to renew a certification with an intermediary that feeds results from labs like Quest directly into the state system. Because of that bureaucratic error, some test results from Quest were held back between July 31-August 4. Ghaly said the certificate has now been renewed..

“I became aware of the magnitude of the data backlog in the late afternoon on Monday,” said Ghaly, “and alerted the Governor and his staff shortly thereafter.”

The state’s backlog of 250,000-300,000 records will be resolved in next 24-48 hours, he said. Those test results are not all “unique records.” Some may be duplicates or re-tests. The system also carries reports for other diseases in the state.

On Friday, the state reported 142 deaths over the past 24 hours related to coronavirus, bringing the total to 10,011. The number of new daily cases was 8,436, for a total of 538,416. Reported hospitalizations and COVID-related ICU stays continued to drop, which is curious given the still-high — and potentially much higher, given the undercount — numbers of new cases being reported and the record-breaking numbers of lives being lost to the virus.

While state leadership said the data failure only impacted reporting for “the past few days,” Los Angeles Mayor Eric Garcetti said the state had told him that the problems extended far beyond that window.

“We don’t believe that it’s something that just happened in the last two or three weeks,” said Garcetti. “The state has told us that these reporting problems may have been throughout.”