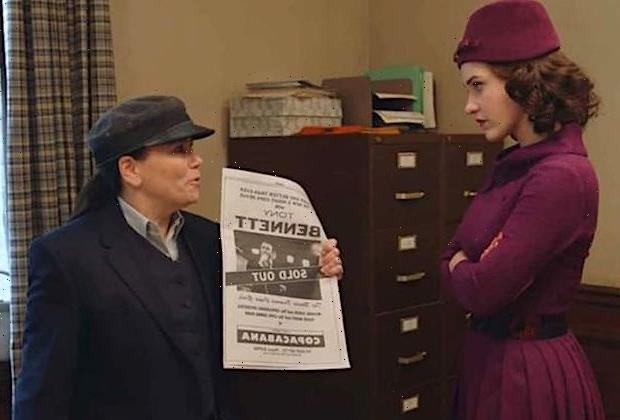 The Marvelous Mrs. Maisel‘s fourth season has come and gone, and you know what that means: Bring on the post mortems!

TVLINE | What was it like filming in Carnegie Hall?
AMY | There was nothing good about COVID, except that nobody was [using] Carnegie Hall. We [normally] wouldn’t have been able to get in there.
DANIEL | It is amazing when you go out on that stage, even when the place is empty.

TVLINE | I’m sure there were some smoke and mirrors, but the theater looked packed with actual human beings…
AMY | We did some “tiling,” where they film different people in different parts of the theater. But we had a lot of people there. And that was one of the best audiences we ever had, in terms of our extras. We always have really good extras. But the extras that came to Carnegie Hall were really stellar. And they looked sensational, too.

TVLINE | The finale was a massive episode for Luke Kirby. How nervous was he?
DANIEL | He was excited. He was so prepared… We told him a long time ago that we wanted to [recreate] Lenny’s [seminal 1961] show at Carnegie Hall, so he had a heads-up.
AMY | He had a momentary [panic] like, “Oh my God, It’s so much [dialogue],” and I was like, “Don’t worry about it. We’ll have plenty of time. You’re not really playing Carnegie Hall. If you f–k it up, we can do it again.” I was trying to keep him calm. And then a few days before we shot it, he sent me, like, two-and-a-half more pages [from Lenny’s routine] that we had [previously] cut. I was like, “Hey, psycho! You were freaked out about three pages. Now you want to do five-and-a-half pages?!” So we ended up shooting even more than we had intended to because he got [Lenny’s act] so inside his head. That’s who Luke is. He’s so into Lenny. And thank God. Because I think it’s the only way you can pull something iconic like that off.

TVLINE | How much time and care and negotiation went into planning and executing Midge and Lenny’s first sex scene?
AMY | Rachel [Brosnahan] and Luke have a lot of chemistry. And they also really like each other as people. So the days that I work with them are some of my easiest days, because they both come to play. They both come knowing every line and really ready to work. We took the care and the time [with that scene] that we needed to, but they’re such gamers and they like performing with each other so much that there were no negotiations. It was more of them going, “Let’s do it again! I can get that better!”

TVLINE | When Midge stumbled upon Lenny’s drug paraphernalia, did she fully understand what it was she was looking at?
AMY | She was surprised. Also, don’t forget, it’s 1960. And Midge is very innocent in a lot of ways. I don’t think she has ever seen a bag of [drugs] before. Her antennae was definitely up though. She walked away with a sense that it was not good for him.

TVLINE | You rarely, if ever, kill off series regulars on your shows…
AMY | It’s strictly about story. Quite frankly, if a death sends characters off on new journeys then [we’ll] kill away. But [Moishe] dying didn’t feel organic. His [health crisis] gave us what we needed, which was the family looking at each other in new ways.

TVLINE | Susie’s trip to the lesbian bar with Midge — did she essentially come out in that scene?
AMY | I don’t think she came out. I think she was confronted with something that she didn’t care to be confronted with. The fact that she and Midge never discussed her personal life is very much by Susie’s design. Susie’s only goal is to become a top-notch manager and to make Midge a star.
DANIEL | It’s a storyline that will continue to expand [in Season 5].
AMY | Until we kill her.