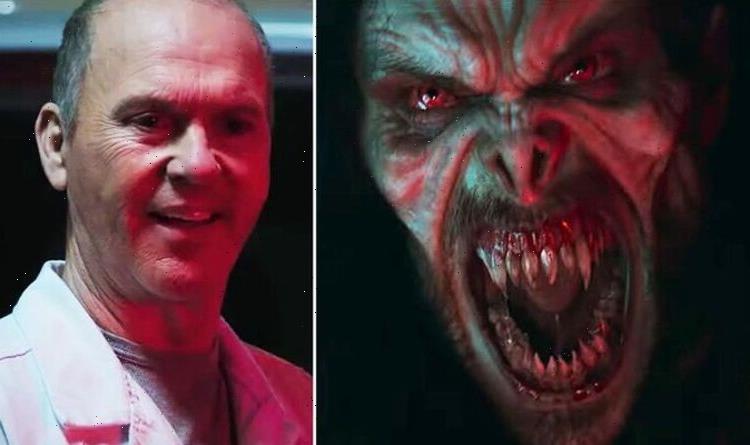 When Michael Keaton’s Vulture first appeared in the Morbius trailers, Marvel fans were confused. What was the MCU villain from Spider-Man Homecoming doing in Sony’s Spider-Man Universe? Was he a variant? Were the studio just ignoring all this?  Ahead of Morbius’ release today, director Daniel Espinosa shared that not only is the non-MCU reality the same as Venom’s but that Keaton’s baddie had been transported across the multiverse from the MCU.

We last saw Keaton’s Adrian Toomes in prison at the end of Spider-Man: Homecoming, plotting with Scorpion.

Yet Morbius revealed that when the multiverse opened up in Spider-Man: No Way Home, Vulture was transported into the other reality where Venom also roams.

The first of two end credits scenes depicted him teleporting into a prison cell in the non-MCU world, before being released since there were no charges against him there.

A second scene then had Leto’s Living Vampire driving out to a remote place where Vulture, somehow in his MCU costume, landed before him.

Vulture said to Morbius: “Thanks for meeting me Doc. I’ve been reading about you.”

Keaton’s villain continued: “I’m not sure how I got here. It has to do with Spider-Man, I think. I’m still figuring this place out but I think a bunch of guys like us should team up and do some good.” Morbius simply commented: “Intriguing.”

Interestingly, the film’s director has also confirmed there is a Spider-Man in this non-MCU universe and given that Maguire already has a different Venom in Topher Grace, our best bet is that it’s Garfield’s world. It’s worth noting the scene had Vulture talking to Morbius like he’d know who Spider-Man was, which seems likely given he walked past a poster of the Web Slinger in one of the trailer scenes that didn’t make it into the movie.

Since the conclusion of The Amazing Spider-Man 2 back in 2014, a third Garfield film had been set up to introduce the Sinister Six – a group of villains who team up against Peter Parker. However, these plans were stalled when the character was rebooted in the MCU with Holland’s debut in Captain America: Civil War.

Yet even back in the prison end credits scene for Spider-Man: Homecoming, six birds are shown flying over Vulture’s head, so this has all been a long time coming for Sony.

Marvel fans had wondered if there would be a sixth baddie in Spider-Man No Way Home, however the rumour was the studio kept it at five because they have plans for a Sinister Six in the future.

The five villains in last year’s MCU movie represented the five Maguire and Garfield films, with one from each outing. Whereas, a Sinister Six could well be made up of baddies from Sony’s Spider-Man Universe.

We already have Vulture and Morbius, then there’s Venom who is already in their universe.

On top of those three, there’s Aaron Taylor-Johnson’s Kraven the Hunter, who is getting his own Sony Spider-Man Universe movie next year, so there are plenty of contenders for the Sinister Six to come together.

It’s now just a question of whether they all team up against Garfield’s Web Slinger following fans’ renewed interest in The Amazing Spider-Man 3 happening, or if they all cross the multiverse and attack Holland’s Peter Parker in the MCU.

Heck, seeing the trio of Peter Parkers in Spider-Man: No Way Home was so popular we wouldn’t be surprised if they’re all back together once again to take on the Sinister Six.

Morbius is out now in cinemas.