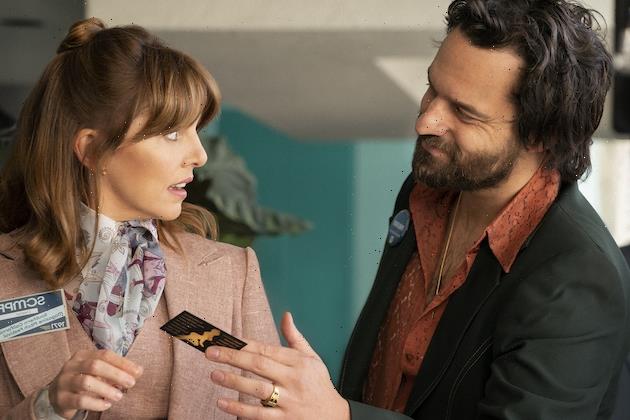 Minx‘s Joyce is a fierce, 1970s feminist with a dream: become editor in chief of the women’s lib magazine she’s been plotting for years. But in Episode 1 of HBO Max’s funny and engaging workplace comedy, which began streaming today, she’s repeatedly told that her potential publication has no audience and no chance of ever coming to fruition.

Enter Doug (played by New Girl‘s Jake Johnson), a surprisingly enlightened porn publisher with several successful titles and a desire to tap into a new market. Joyce (Elementary‘s Ophelia Lovibond) meets Doug at a magazine-pitch festival, and though she initially scoffs at his offer to discuss her magazine — which she wants to call The Matriarchy Awakens — rejection after rejection from mainstream publishers wears her down quite a bit. And when Doug swings by her job to tell her that some of his models have read her sample mag and were really into it, she’s flattered in spite of herself. Still, she doesn’t want to be the next title at Bottom Dollar Publishing. 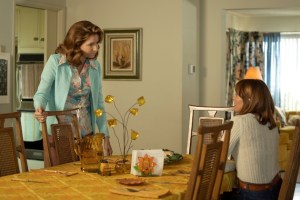 But a visit to her older sister Shelly (Playing House‘s Lennon Parham), a mom/housewife who’s supportive of Joyce’s dream, changes her mind. So she shows up to see what Bottom Dollar is all about. She meets Tina (TURN: Washington’s Spies‘ Idara Victor), Doug’s right-hand woman/office manager; Bambi (The Righteous Gemstones‘ Jessica Lowe), a model with editorial aspirations; and Richie (Bless the Harts‘ Oscar Montoya), a make-up artist with a photographic eye. Doug makes one point very clear, very quickly: Joyce’s magazine isn’t going to sell without a hook, and that hook is going to be photographs of nude men.

So they hold a casting call for the cover model, and Joyce sits in shock (alongside the rest of the staff, who are much less bothered by the whole thing) as a whole lot of hopefuls come in and drop their pants for consideration. The guy they ultimately choose is a dumb-as-rocks, highly sculpted firefighter named Shane (relative newcomer Taylor Zakhar Perez).

Joyce’s confidence in the plan, and in this alteration of her dream, causes her at one point to bust into the cover shoot and get into an argument with Doug. But then Shelly visits her younger sister’s apartment and brings her a copy of the latest Cosmo, which features Burt Reynolds’ infamous nude centerfold. Buoyed by this mainstream interest in titillating material — and in giving women the power to be that kind of consumer — Joyce goes to Doug’s house and asks his forgiveness. She also pitches an alternative set-up for the cover shoot.

So as we watch, Joyce and Doug oversee a new shoot in which Shane is catcalled by a group of women (the same way Joyce was harassed by a group of construction workers at the top of the episode), and Doug commends her for pulling off the whole endeavor. The only thing, though: The Matriarch Awakens isn’t a good title for Bottom Dollar. As the episode closes, we see her putting the finishing touches on the cover bearing the mag’s new name: Minx.

Now it’s your turn. What did you think of the premiere? Grade it via the poll below, then hit the comments!