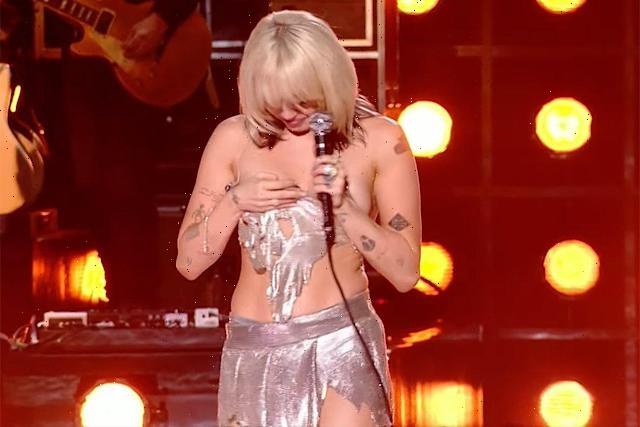 During her live New Year’s Eve television show from Miami, the singer lost her skimpy top while strutting onstage at the start of the song “Party in the U.S.A.” Realizing that she was about to see more than the ball drop, she turned and headed backstage as her band played on.

She returned wearing a red jacket that she had used earlier in the show. “Everybody’s definitely looking at me now,” Cyrus said, adding, “I’m still in the most clothes that I’ve ever worn on stage.”

Later in the show, cohost Pete Davidson thought it was only fair that he, too, show a glimpse of his nipple, lifting his t-shirt to reveal the orb.

The night had already posed several challenges to the production, as transportation issues and the continued plague of Covid-19 had caused some cancellations. Cyrus acknowledged that in her closing remarks.

“Thank you so much, everybody, thank you. Tonight’s show was all about being flexible, rolling with the punches, and making the best out of even the worst circumstances. And that resilience shouldn’t end here. Let’s bring that into the New Year with us,” Cyrus said at the end of the program. “We’ve all learned how to expect the unexpected, and rather than see it as a problem, let’s see it as an opportunity. I wish everyone here in Miami and everyone watching from home a happy and healthy 2022. Thank you for making tonight possible. You were really all that I needed to have the ultimate party.”

Media And Entertainment Stocks Close The Book On Mixed 2021