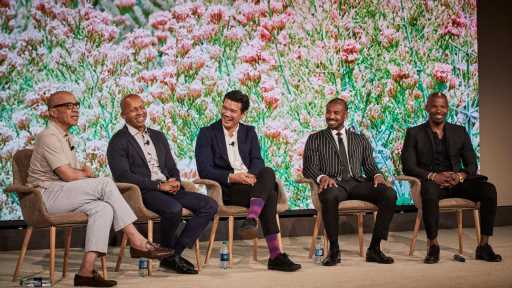 Lawyer, founder of the Equal Justice Initiative and author of Just Mercy took the stage at CAA Amplify to talk about the Warner Bros. film based on his book. But before he was joined by the film’s stars Michael B. Jordan and Jamie Foxx and director and writer Destin Daniel Cretton, he talked about what he hopes Just Mercy does  and how it reflects his work with the Equal Justice Initiative, a non-profit that provides legal representation to prisoners who may have been wrongly convicted of crimes,  prisoners without effective representation, and those who may have been denied a fair trial.

Stevenson captivated the audience as he spoke on narrative influence on social change, unpacking our flawed justice system and how often people of color — particularly black and brown men — are wrongly imprisoned. We oftentimes talk about these issues surrounding incarceration and what many consider modern-day slavery, but we seldom address the issue with hard truths.

New Hollywood Podcast: Ava DuVernay Talks Impact Of 'When They See Us' And Using Art As Activism

“We often misunderstand topics,” said Stevenson. “Underneath these topics are narratives — and narratives are what we need to change.”

Stevenson’s memoir Just Mercy and the forthcoming movie, which is set for a January 17, 2020 release date, follows Stevenson’s first case which involved Walter McMillian, a young black man sentenced to death for a crime he didn’t commit. Despite his airtight alibi, McMillian was convicted and spent six years on death row before being exonerated. The film certainly aligns with Stevenson’s philosophy of using narrative to ignite social change. In it, Jordan portrays Stevenson and Foxx plays McMillian.

He points out it’s not often we see these stories put into light and if they were put into the spotlight more, change would happen. He points to the movie The Burning Bed starring Farrah Fawcett and how it shed light on the issue of domestic violence and how there were multiple films about marriage equality that was the driving force behind that particular LGBTQ movement. As he points out, people in Germany are constantly reminded of the Holocaust and aren’t afraid to face those demons and say “never again”. Stevenson explains how we have never created spaces to say “never again” and we keep replicating these dynamics of inequality in one way or another. He hopes that one day our country will be more open about our tragic past and narrative storytelling will put criminal injustice, lynching and slavery in the forefront so that things can change.

“It’s about educating people and getting exposed…but it’s also about moving this country toward justice, dignity and human rights,” he said. “It’s really about using all of our tools to push us.”

After Stevenson spoke, a sizzle reel and first look at Just Mercy played with Jordan and Foxx speaking about their experience making the film and its importance. “If you can relate, relate and if you can’t, have some empathy,” said Jordan in the video.

Stevenson said that the team assembled for the adaptation of Just Mercy was very much appreciated because they weren’t just all talk about his story — it was also felt. “There was this vision motivating our side…the desire for justice shaped everything we were doing.”

Cretton was connected to Stevenson via Ryan Coogler who praised his work on the highly underrated indie Short Term 12. Through that connection and after talking to Cretton, Stevenson knew that he was the man for the project. As for who would play Stevenson in the film, Cretton said that after reading the book he immediately thought of Jordan.

He called Coogler and told him and through the miracle of three-way calling and Coogler’s skills of connecting, they were on a call with Jordan — who was in Vegas at the time.

Eventually, Jordan and Foxx signed on to the project. For Cretton, he felt the pressure of making such an important and personal movie not just for Stevenson but for a topic that seldom gets put into the mainstream.  He said that signing on to the project was “the most terrifying” thing he has done. But ultimately, he was confident in what he and the Just Mercy team was doing with the story.

“If I put my own self-doubt and neuroses aside, this is a very easy movie to be proud of because of the work that these guys did,” Cretton said. “The performances were true and moving… to be able to read the words in Bryan’s books and see it come to life, every day — it was a life-changing experience for me.”

The director went on to say that he stayed close to Stevenson and “swam in his spirit” while making this film. He said that the book opened his eyes to a subject that he doesn’t think about a lot and praised Stevenson for illuminating the humanity in people you don’t normally think about.

Foxx stepped into the role of the wrongly accused Walter “Johnny D” McMillian, bringing in some funny anecdotes about racism and stereotypes he experienced while living in Terrell, Tex. Humor aside, Foxx said “There are some things that I experienced and witnessed that equipped me for these types of things.” He continued to say that if you live outside the norm like him, “we all have a Johnny D in us.”

It seems like Jordan might have the most pressure in playing Stevenson. More than that, there might be difficulty in not being “preachy” with social justice themes. But the actor said that he just had to stay out of his own way to achieve an ideal performance.

“As I got to know Bryan…I was nervous because this guy is damn near perfect,” said Jordan. He went on to say that he always liked how the one common thread with people and humanity is love. That’s what he anchors his performances with. “I like to make people think and feel — it has to be real,” said Jordan of his performance. “I just want to do things that are honest and help people grow.”

He added, “I am not imitating anybody. I just want everyone to feel the essence of Bryan. That may be me up on the screen, but I want you to see and feel this man.”