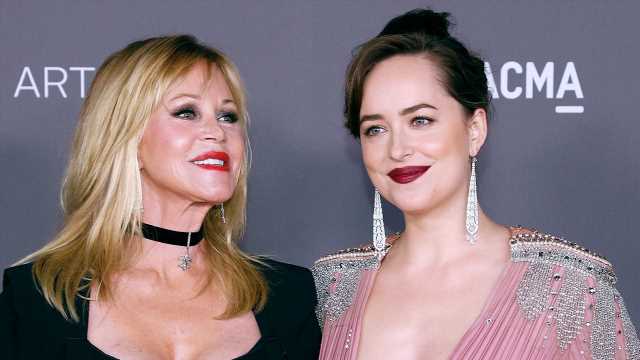 The actress, 62, spoke to PEOPLE Now while at the Farrah Fawcett Foundation’s Tex-Mex Fiesta in Beverly Hills on Friday night and didn’t shy away from expressing her adoration for Johnson, 29, and Martin, 42.

“I love my daughter’s boyfriend. I think that they’re an awesome couple,” Griffith said.

In May 2018, Griffith gushed about Martin in an interview with PEOPLE.

“I adore him!” She said. “But [Dakota] is very private about her life, and I respect that.”

Johnson and Martin first sparked dating rumors after being spotted on a mid-October 2017 sushi date in Los Angeles, and a source told PEOPLE in April that the two are “pretty serious.”

“Dakota has been filming out of state, but most weekends she comes back to Malibu to spend time with Chris,” the insider said at the time. “They are very low-key together. They usually have friends over and rarely go out.”

The couple has been spotted out and about, including with Martin’s ex-wife Gwyneth Paltrow, with whom he shares 15-year-old daughter Apple and 13-year-old son Moses.

Paltrow, 46, was married to Martin for 11 years before “consciously uncoupling” in 2014.

In August, the trio were photographed with Paltrow’s husband, producer Brad Falchuk, during a beach day in the Hamptons.

The sighting came one day after Johnson and Martin were seen taking a dip in the Hamptons on Sunday.

Paltrow and Martin are known for their modern family arrangement. Since their split, the two have celebrated holidays together, and Martin even went on Paltrow and Falchuk’s honeymoon alongside the pair and family friends in December.

Catch PEOPLE Now every weekday at 12:00 p.m. ET/9 a.m. PT on People.com or on the PeopleTV app on your favorite streaming device. Want even more? Check out clips from previous episodes of PEOPLE Now.