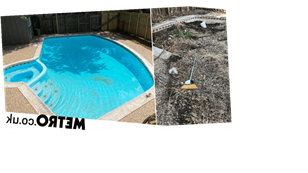 When John Reynolds, 35, bought a rundown three-bedroom house for just £15,000, he was expecting it need a lot of hard work to make it turn a profit.

He was right about the hard work, but there was one thing he didn’t expect: to find a 40,000-gallon swimming pool hidden in the back garden.

John bought the property two years ago, after it had laid vacant for a year following the death of its previous owner.

The nurse was able to buy the house from the local county authority for just £15,000, weeks before it was due to be demolished and after it had been occupied by a hoarder for 20 years.

The house wasn’t in a good state. The previous owner had left it behind filled with piles of junk, 100 feral cats, and a garden covered in weeds and debris.

With all the mess inside the house, the garden was the last thing on John’s list of priorities.

Then, one night, a massive storm arrived. The rain revealed that underneath all that dirt was a 32ft by 17ft pool.

He said: ‘I could see a bit of concrete edging but I just thought it was part of the patio or more flower beds.

‘There was so much going on with the house, that little area was my last concern, but I did notice that it was always boggy despite the fact we hadn’t had any rainfall for weeks.

‘When a huge rain storm finally came, I got a call from my neighbour asking if I’d seen my pool.

‘When I went out you could just see the water line tile and the water was standing right up next to it. I was in shock.

‘I thought “whether I live here or sell the house, I can’t leave it like this”.’

Even after years of being hidden by dirt and rubbish, the pool was in great shape and just needed some cleanup work.

After removing old furniture and classic car parts among the discarded items left in the shell, John spent £7,500 [$10,000] repairing leaks, cleaning, repainting and refilling the pool.

It would have cost £120,000 to install the same pool in the garden, so it was a real treasure to find.

John spent 18 months renovating the home and cleaning out the pool, and ultimately decided to keep the house as his own, despite it now being worth £165,000.

John, from Mineral Wells, Texas, said: ‘It feels like I have stumbled across a winning lottery ticket.

‘Never in a million years when I bought the property did I think I would be swimming in my own pool.

‘I bought it as a bit of an investment with the intention to do it up and sell it on, but it has yielded so many surprises I don’t know if I can let it go.

‘My friends and I are in it every day for hours on end now.

‘You couldn’t wish to find a bigger reward in your back garden.

‘I used to drive past the house all the time and it always caught my eye because it had so much potential.

‘When I finally bought it, it was so dilapidated you could smell it from two blocks away.

‘Transforming it has been a labour of love, and I’ve decided it’s going to be my home now.’