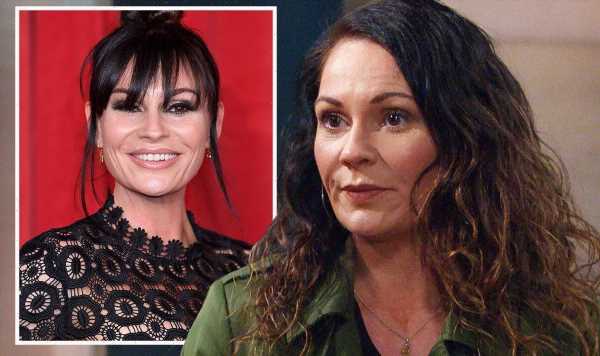 Lucy has become central to many storylines on Emmerdale as her alter-ego, Chas Dingle, who currently has no idea her mother, Faith Dingle (played by Sally Dexter), has secondary breast cancer. The actress will take the spotlight in this week’s episodes of the ITV soap as she accuses her sister-in-law, Moira Barton (Natalie J Robb), of having affair, not realising she has the wrong end of the stick. The soap star doesn’t tend to talk much about her life off-camera but earlier this year, she did celebrate a milestone birthday ahead of a big anniversary.

Chas celebrated her 44th birthday earlier this year, with the character born on February 23, 1978, and this makes her a whole year younger than the actress who plays her.

The soap star turned 45-years-old back in the spring as Lucy was born on March 1, 1977, and it is thought she celebrated privately with friends and family.

This ties in with the actress celebrating being on the show for 20 years as she was cast in the weeknight serial drama when she was 25-years-old.

Lucy made her first appearance on the programme in October 2002, around the same time as the soap’s 30th anniversary.

For this reason, it could be thought Lucy will be central to the show’s 50th-anniversary celebrations later on this year.

But Emmerdale wasn’t Lucy’s first shot at fame as she actually started her acting career when she was a young adult.

The actress starred in shows such as Soldier Soldier and Dalziel and Pascoe, before landing her first major on-screen role.

In 2002, again when she was just 25-years-old, she played the character of Helen Raven on the former soap opera, Crossroads.

She only played the character for a year before committing to the role of Chas, which she has been in for almost two decades.

When she was 36-years-old, she featured in the line-up for I’m A Celebrity…Get Me Out Of Here! and she finished in third place.

Was 25 and for the first time I had money

The actress also had her children at different ages, with Lucy giving birth to her first child in 2005, which led her to take maternity leave.

Lucy was around 28-years-old and it wouldn’t be until five years ago when she was 40-years-old she gave birth to her twins.

Her two daughters arrived as a result of a second round of IVF for the actress and her partner at the time, Rudi Coleano.

Speaking about expanding the family, Lucy explained: “Lola was [Lucy and Rudi’s 11-year-old daughter at the time] fully aware of it all.

“So we want to be honest with the girls and let them know how special they are and how much they were wanted and how easily it could have been that they weren’t here.”

“Having IVF was hard but we feel so lucky the girls have come along,” the soap star continued in her interview with the Daily Mail back in 2017.

“I think it’s important to be honest about everything to do with how they got here.”

With three children and having been on the show for so long, it would not be out of the ordinary for the actress to think about her future on the show.

Speaking about the security of her job, the soap star said: “No one is safe. I’m on a year’s contract so every year I wonder, ‘Is this my last?’

“It’s the show’s 50th anniversary this year. Do they need to sacrifice someone to pull in the audience?” she explained.

On why she has stayed so long, the actress added: “It’s like going to work with my best mates. And I’ve built my life here, I’ve adopted Yorkshire as my home.

“My kids are settled and every time I get the scripts, there’s something that will make me laugh or cry.

“I’d be quite happy to retire at Emmerdale,” she told Metro.co.uk so there could be a few more years of Chas on-screen yet.

The actress also spoke about joining the cast when she was 25-years-old and how she felt about securing a role she never knew would have lasted this long.

“I was 25 and for the first time, I had money. I could buy clothes, go out drinking and just go a bit crazy,” she said.

“I’d impulsively go on shopping trips to London with [former co-star] Sammy Winward. I had no responsibilities,” Lucy continued.

“I lived with my then co-star Amy Nuttall for a while and the front door was always open, waiting for a taxi to take us out for the night.

“It was fun,” the soap star added but life has become a lot calmer since.

Viewers will need to keep a close eye on Chas in the coming weeks and months as it’s only a matter of time before she learns about Faith’s cancer diagnosis.