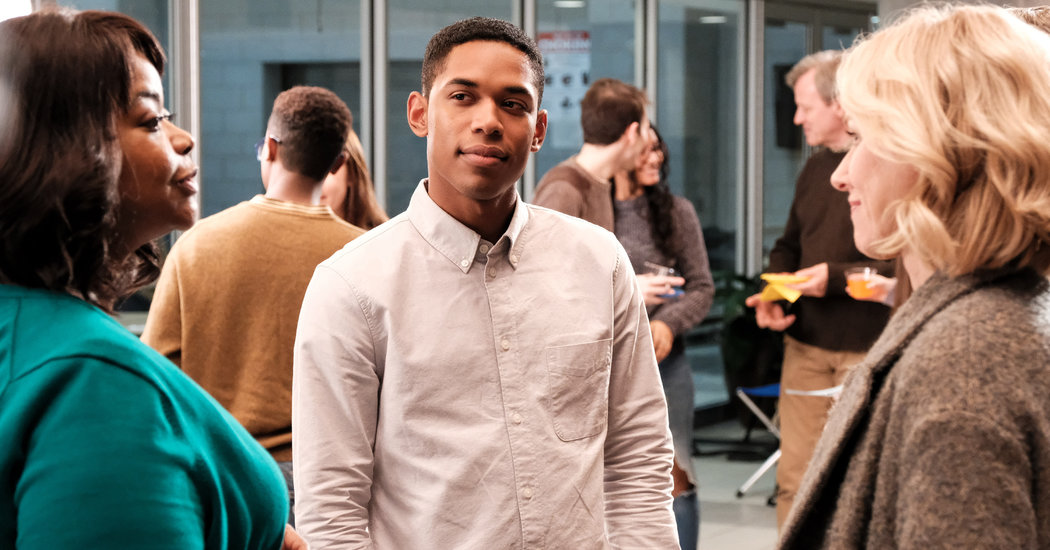 The title character of “Luce” is introduced as a star student and first-rate apple polisher. Speaking to a school auditorium, he lavishes praise on parents and teachers, who surely love to hear it.

But Luce (Kelvin Harrison Jr.) may have an incendiary side. His history and government teacher, Ms. Wilson (Octavia Spencer), summons his mother (Naomi Watts) to discuss a paper he wrote. The assignment was to adopt the voice of a historical figure. Luce chose Frantz Fanon, which, in itself, might be another sign of precocity. “The Wretched of the Earth” isn’t regular high school reading, after all, and if other students could write as Fidel Castro, why not Fanon?

But given that Luce was adopted, and spent his early childhood learning to a shoot a gun in strife-riven Eritrea, and that he has parroted Fanon’s views on violence during a time of vigilance around violence in schools, Ms. Wilson felt compelled to search his locker. Whether that incursion should be seen as legally justified gets debated in another scene.

The parent-teacher confrontation brings sensitive questions to the fore. How well do Luce’s parents know their son? (Tim Roth plays Luce’s father.) How much has Ms. Wilson allowed her expectations of Luce to influence her actions — and is her behavior emblematic of hypocrisy surrounding race and success in the United States? (The film is pointedly set in Arlington, Va., a stone’s throw from Washington.)

Like Ms. Wilson, Luce is black. His parents and the school’s principal (Norbert Leo Butz) are white. And all the authority figures regard Luce as an exemplar student and athlete, someone to encourage and protect. An African-American teammate (the rapper Astro), punished for drug use similar to Luce’s pot smoking, acidly suggests to Luce that they regard him as an Obama figure — a rare black man whom they feel O.K. elevating.

The film proceeds dialectically, with each scene adding a wrinkle to the characters’ motives. To say that it unfolds like a play is both accurate and undersells how gorgeously it has been rendered for the screen. “Luce” had its origins onstage at Lincoln Center, and the screenplay was written by the playwright, J C Lee, and the director, Julius Onah. But Onah (“The Cloverfield Paradox”), shooting on 35 millimeter, has thought through the staging in cinematic terms, lighting a school library and suburban kitchens as cold, ominous spaces. During his closing words, Luce addresses the camera directly.

Harrison, who has to embody the incongruities of Luce’s code switching and possible masterminding (in a rare scene that rings false, he has a Max Cady-like encounter with Ms. Wilson at the supermarket), is the breakout of a uniformly excellent cast. Acting as someone who feels compelled to act a certain way is not easy, and the film is interested in stripping away layers of artifice, then building them up again.

When you purchase a ticket for an independently reviewed film through our site, we earn an affiliate commission.