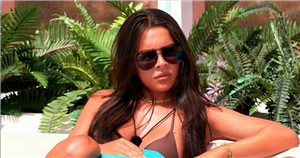 Love Island fans were left stunned after Gemma Owen and Ekin-Su Cülcüloğlu came to blows regarding their relationship statuses.

During the latest episode, Dami Hope decided to "read" Gemma's mind and told her that she may not be as interested in Luca Bish as she's letting on.

Dami said: "You’re happy with Luca right now. I feel like it would take a lot for your head to turn but there is a small chance that it probably could if someone really came in that was 100% you.

"I feel like that is where the confusion would probably come for you because we’re not here to play games. I feel like you’re still open in a sense, probably more open than Luca."

Gemma admitted: "Yeah, that was quite impressive. I don’t think you’re that far wrong."

However, after Ekin-Su heard her confession she decided to tell Paige Thorne and Jacques O'Neill about what Gemma agreed to.

As the rumours started to circulate around the villa, Gemma decided to confront Ekin-Su and branded her a "d***head" during their heated exchange.

Gemma said: "You have started this, you’ve made drama over nothing!

"You had no right to say that and knew that was going to cause s***."

One person said: "Gemma you’re getting p****d but Ekin literally said exactly what happened. She just shouldn’t of blabbed her mouth off."

Another shared: "Ekin is s**t stirring yes BUT it doesn’t make what Gemma said right? And surely Luca needs to know that. They are both d***s."

A third penned: "Tbf it was very unnecessary for Ekin to approach Paige and Jacques unprovoked and tell them what Dami and Gemma were talking about but she’s my queen so I’m gonna turn a blind eye."

Meanwhile a fourth added: "I think Paige said it in the wrong way to Gemma which made it 100x worse and got her so mad cause ekin did not say it like that to her and Jacques at all."