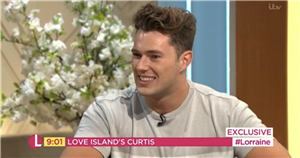 Love Island star Curtis Pritchard has revealed Maura Higgins’ reaction after he opened up on his sexuality.

The professional dancer, who came fourth in the final alongside Irish bombshell Maura, said he “wouldn’t rule out” dating a man in future during an interview with The Sun.

“I’ve been with women and I’m with a woman now,” Curtis told the publication. “You can never put a label on anything.”

He added: “It’s a cliche to say, but love is blind. I can never ever say what will happen in the future… I wouldn’t rule anything out.”

Following the news, Curtis appeared on Lorraine to talk to Christine Lampard about his life post Love Island – and revealed Maura's reaction to his revelation.

“I spoke to Maura last night, because we saw it,” he began.

“Maura’s head is clear and mine is clear. The future is an unwritten path… last year, would I ever have said I’d be on Love island?”

He continued: “Love is blind, and I truly believe that.”

Speaking about life after appearing on the the show, Curtis added: “ It’s a whirlwind, and I’m taking it in my stride.

“The main thing is, and I say this for all the people in a couple. Make sure you put time aside for your relationship.

“If we’re not careful, you’re going to go your separate ways.”