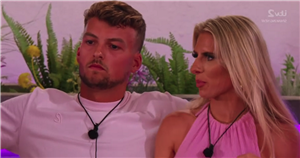 In Thursday’s episode, PE teacher Hugo laid into Toby, 22, after he chose to recouple with new bombshell Abigail Rawlings, 27, who previously said she would "steal him" fromChloe Burrows.

Speaking about Chloe while choosing what girl he'd like to recouple up with, Hugo said: “Not only is she out of this world beautiful, she is super intelligent, she is funny, and whenever I am with her I am definitely at my happiest.”

But it didn’t stop there. Adding more fuel to the fire, the 24 year old continued: "If I'm completely honest, she doesn't deserve to be treated how she has been in these past 24 hours.

To which Chloe nodded by responding: “Say that again.”

Hugo continued: “I firmly believe a lot of this test stuff is complete bulls**t.

"You deserve someone who’s honest, communicates with you and who knows what could happen, stranger things have happened. So the girl I would like to couple up with, is… Chloe."

Chloe was left delighted over the jaw-dropping speech as she exclaimed: "Love that so much!"

Backing him up was Faye, with the villa immediately thrown into a state of conflict.

Fellow Islanders were left stunned as they listened to Hugo’s dramatic speech and so were fans, who were quick to voice their opinion on Twitter.

One person wrote: “DID TOBY JUST SAY HUGO CAN’T EVEN GET GIRLS”.

“Watching Toby get hype like that was hilarious!" another said. "What the hell is Toby gonna do? You just got rinsed by the biggest loser in the house LMAOO."

While another quipped: “Why Hugo hiding behind Aaron when Toby was fuming, LOVE ISLAND IS FINALLY STARTING.”

And a fourth person wrote: "HUGO THROWING SM SHADE AT TOBY IS ICONIC.”

The dramatic speech came after Hugo decided to save Chloe, 25, from being dumped after Toby's shock decision and picked her to be coupled up with in the villa as he lamented the semi-professional footballer's actions.

This meant newbie Georgia Townend, 28, was dumped from theLove Islandvilla on Thursday's episode after a tense recoupling saw her failed to be picked by any of the male Islanders.

The marketing executive from Essex only entered the show as one of three newcomers earlier this week with Abigail and Tyler Cruickshank.

And despite admitting that Hugo was her "absolute number one" prior to entering the villa, the PE teacher, 24, whofans had feared would "pie" her , failed to choose Georgia after admitting there was "no spark".