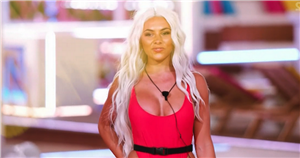 Love Island viewers were left all saying the same thing as they watched the sexy singletons take part in a racy challenge.

Danica Taylor got a text during Tuesday's episode of the ITV2 dating show and the Islanders learned that they'd be competing against each other in a sexy challenge to try and raise each others’ heart rates the most.

The sexy singletons' saucy outfits included Paige Thorne as a lifeguard, Ekin-Su Culculoglu in a bridal outfit, Dami Hope as a lab technician, Jay Younger as a cowboy and Davide Sanclimenti as a mysterious masked bandit.

As the Islanders showed off their best moves, viewers at home were left distracted by the girls' tan lines.

Taking to Twitter, one fan penned: "Is anyone else just laughing at the girls tan lines."

Another added: "Could they not have found outfits that cover their tan lines."

A third person posted: "The tan lines are outrageous."

While a fourth social media user said: "Lmao I’m childish cos the tan lines are cracking me up."

Some viewers were left "feeling sick" after the girls seductively sucked the boys fingers during the heart rate challenge.

A third agreed: “they need to stop sucking these fingers Christ?! The don’t wash their hands!”

Drama erupted later in the episode after it was later revealed that Jacques O'Neill and ex-girlfriend Gemma Owen’s heart rates were raised the most by each other – leaving their partners Luca Bish and Paige Thorne feeling angry and confused.

Tensions were also up in the air between Andrew Le Page and Tasha Ghouri after it was revealed his heart rate was raised the most by Danica.

Danica pulled Andrew for a chat just hours before the challenge, telling him she was interested in getting to know him more.

Fans will have to wait if Andrew's head get turned by Danica or if he'll stick with Tasha until the end.