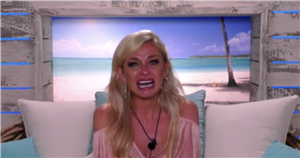 Love Island have responded to claims Amy Hart has left the villa after being left “humiliated and heartbroken” by Curtis Pritchard.

The pair sat down for a crisis talk after the latest recoupling, when he admitted he’d had his head turned by Jourdan Riane during the epic Casa Amor twist.

But following the savage dumping – in which Curtis said he "couldn't promise" his head wouldn't turn again – rumours ran rife that Amy had left the villa for good on social media.

However, a source has now confirmed that Amy is still very much taking part in the series.

A source told OK! online: "Amy hasn't quit the villa, and false speculation of this nature is of course concerning and unhelpful for her family and friends to read about."

Curtis had said: “I meant everything I said… but… I can’t promise you this won’t happen again.

“I’m sorry for everything I have done to you. You have every right to say whatever you want to say about me or to me. I am truly sorry.”

Amy replied: “How can you go from saying you want a future with me, to saying you don’t want to be with me? You’re a liar, a compulsive liar,” as she walked away.

It has been reported that Love Island bosses stepped in to relieve Amy from the villa so she is able to receive psychological support from a team of experts, but has now returned and will continue to compete on the show.

A Love Island source confirmed: “We take the emotional well-being of all the Islanders extremely seriously.

“We have dedicated welfare producers and psychological support on hand at all times who monitor and regularly speak to all of the Islanders in private and off camera, especially if someone appears to be upset.

“All the Islanders are therefore fully supported by the professionals on site and by their friends in the villa.

“This means Islanders are always able to reach out and talk to someone if they feel the need. We will of course continue to monitor all of our Islanders in line with our robust protocols.

“Love Island holds a mirror up to relationships and all the different dynamics that go with them.”

The hit ITV2 show amended their duty of care process ahead of the new series following the tragic suicides of previous contestants Sophie Gradon and Mike Thalassitis.