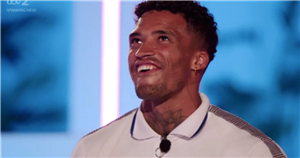 Love Island’s Michael Griffiths, 27, was branded "childish’" by viewers after he laughed at the news that he faced being dumped from the villa – despite criticising ex Amber Gill, 21, for doing the same thing.

The show’s Sunday night twist saw host Caroline Flack, 39, reveal Michael and Joanna Chimonides, 22, would not be able to remain in the villa together.

And Michael seemed to struggle to keep a straight face as the couple’s fate was unveiled.

Fans on Twitter couldn’t help but point out Michael’s “childish” reaction in the most hilarious way.

One fan tweeted: “Caroline Flack: Michael And Joanna, you haven’t been saved by the public or by your fellow islanders. Michael: CHALDISH.”

Another added: “Michael looking in the mirror and seeing who really is CHALDISH”.

Other fans pointed out Michaels hypocrisy after he repeatedly called fellow Islander Amber “childish” for laughing during serious conversations.

One fan tweeted: “So michael is allowed to laugh when he is angry but amber is not????”

Another pointed out: “Interesting how Michael spent the whole series so far criticising Amber for laughing when she’s uncomfortable…. LOOK WHAT HE WAS DOING AT THE END OF THAT EPISODE EH…. not so immature when it’s u doin the laughing eh Mikey boy.”

The criticism comes as Caroline Flack gate-crashed the Love Island party last night to reveal Michael and Joanna and Anna Vasili, 29, and Jordan Hames, 24, were voted the least favourite couples by the public.

The rest of the Islanders then had to vote for the couple they wanted to save – and chose Anna and Jordan leaving Michael and Joanna vulnerable.

In a further twist, Caroline, also known as The Flack Attack, announced only Michael or Joanna them would be able to stay in the villa.

But, fans will need to tune into tonights episode to find out who stays and who goes as the episode was left on a cliff-hanger.