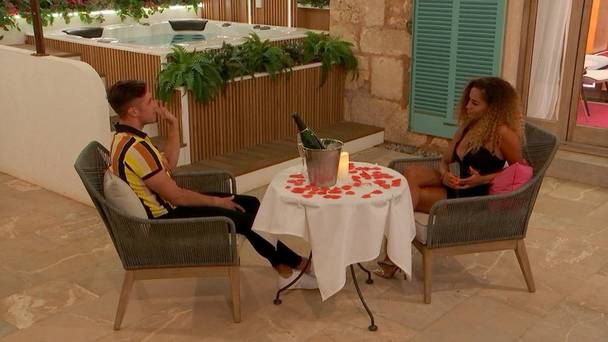 Don’t know about you, but I’ve been on tenterhooks ALL DAY.

Was Amber going to choose Greg?! Was she going to be a complete mug and give Mr ‘I SeEm To bE TaKinG my fRusTraTioNs OuT on YOu’ another whirl? Did it even matter, considering no one was being sent home?!

First, we had to go through the rigmarole of making an actual decision.

In some kind of strange topsy-turvey Universe – you know, where Hilary Clinton is the American president and the Brexit referendum never happened because it never should have been a referendum in the first place – Belle was talking sense and Ovie was talking utter RUBBISH (apart from him saying “Greg’s been absolutely wonderful”). So disappointing.

Before the recoupling, Belle came across with her two cents, saying: “He has completely betrayed your trust and picked someone else over you. If I was in your position, I would start something new with someone else.” YAAAAS QUEEN.

Yeah, but she’s got more of a chance of actually winning, like FIFTY THOUSAND POUNDS, with a very hot Irish gentleman, oh wise one.

Laying it on thick with Amber, Michael said: “I’ve made the decision that put us in this situation. And I have to live with that. You know that I like you, that’s all you need to know really.”

He then made out that he was about to put the lunge in and gnaw the face off her in a neaderthalic display of domination.

India chose to couple up with… Ovie.

Harley chose to couple up with… Chris (who probably wanted to hook up with Francesca).

Belle chose to stay coupled up with… Anton.

Anna chose to stay coupled up with… Jordan.

Maura chose to (officially) couple up with… Curtis, who looked like he was heading straight to the buffet on a retirement cruise around Cabo.

Francesca was left with “literally no other option” but to couple up with Michael. No, he wasn’t even sent home. • Francesca owning Michael was everything…

• Chris getting all the love during the Mr and Mrs.

• “I don’t think you and Greg will work.” She didn’t ask for your honest opinion, plus, what happened to you leaving her alone if she wanted to get to know Greg, HAH? What’s that all about, MIKE???

The UK is currently mostly voting for Greg and Amber as their favourite couple to stay in the Villa. Unfortunately, for Francesca (who got lumbered with Michael) it means she’ll probably be going home on Sunday.